Difference between revisions of "Saskatchewan (Canada)"

Saskatchewan, a province of Canada, is the central one of the three prairie provinces in Western Canada. On the east is Manitoba and on the west is Alberta. The name Saskatchewan is an Indian name meaning rapidly flowing river. In fact, two rivers of this name flow through Saskatchewan—the North Saskatchewan River and the South Saskatchewan River, which originate far apart in the West in the Rocky Mountains and meet just east of the city of Prince Albert, then continue as one to Lake Winnipeg.

Saskatchewan is Canada's 7th largest province, with an area of 651,900 km2 (251,700 square miles). The estimated population in 2008 was 1,015,985. Regina is the capital of the province. One of the first members of the parliament was Gerhard Ens of Rosthern, a Mennonite, who later joined another church. In Regina in the 1950s there were also a Mennonite Brethren church and a General Conference Mennonite Church. 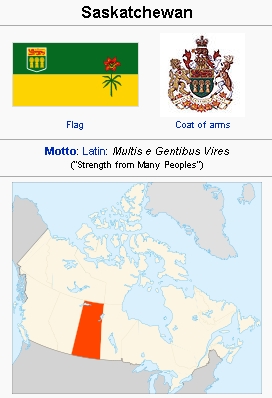 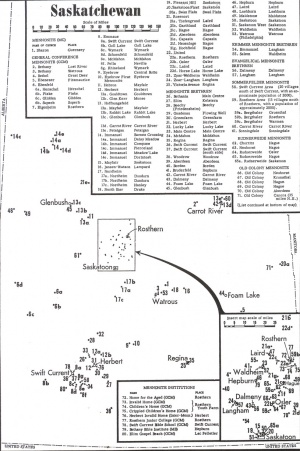 The first Mennonite settlers came from Russia to Manitoba in the 1870s, but because of their large families they were soon looking for new land. The first five families from Manitoba arrived in Rosthern, 50 miles north of Saskatoon, in 1891-1892. Soon the adjoining districts of Eigenheim, Laird, and Waldheim were settled. Some came directly from Russia to this district. Some Mennonites from Prussia settled in the Tiefengrund district, which is only a few miles north of Laird. In the main, these  districts formed the Rosenort Mennonite Church, which in the 1950s had about 1,500 members.

In the early 20th century, the Old Colony Mennonites, mostly from Manitoba, took land near Hague and Osler and settled in many villages. Some went across the South Saskatchewan River, where the town of Aberdeen is located. They were joined by other Mennonites and generally lived on separate farms. A somewhat milder branch of the Old Colony Church was called the Bergthaler Church. In the early 1920s a large part of the two groups immigrated to Mexico and Paraguay, because they were dissatisfied with the requirement of the public school system in Canada that the English language be used in instruction. In the southern part of Saskatchewan, near Swift Current, a number of villages were settled by Old Colony Mennonites. Other Mennonites came from Minnesota, Nebraska, and the Dakotas and settled near Langham, Dalmeny, and up to Mennon and Hepburn. Many of these were Mennonite Brethren, whose church interests are centered mainly in Hepburn and Dalmeny. South of Langham a group of Krimmer Brethren settled, where the names of Waldner and Stahl predominate. Across the North Saskatchewan River from Waldheim and Langham Mennonites also settled, and here the small town of Borden was located. A greater party from Kansas and Oklahoma settled near Drake about 100 miles southeast of Saskatoon. Not far away from these, near Guernsey, there was an Mennonite Church (MC) group.

Later smaller and larger colonies of these first settlers were established in the northern parts of Saskatchewan, near Meadow Lake, Carrot River, Lost River, and other places. When the immigrants in the 1920's came from Russia, larger settlements were established near Herschel, Fiske, Kindersley, and Superb (Ebenfeld congregation) in the western part of the province; also at Rabbit Lake and Glenbush (Hoffnungsfeld) the congregation in the northern part of this province, which was more or less settled; and also in the Hanley and Dundurn districts south of Saskatoon. Somewhat northwest of Regina was the Eyebrow Mennonite Church.

In 1957 there were about 20,000 (pop.) Mennonites in Saskatchewan, who in the main belonged to seven branches.

The yearbook (1954) of the Conference of the Mennonites in Canada gave the following statistics of its congregations in the province:

Conference of Mennonites in Canada Congregations: 1955

This would give us the following totals of population:

In 1903 Mennonites (General Conference Mennonite) of Rosthern and surrounding districts gathered in Eigenheim, near Rosthern, to consider the question of establishing a Mennonite high school. In 1905 the German-English Academy was opened in Rosthern and still functions as the Rosthern Junior College. This school was incorporated in 1908 under a special Act under the name German-English Academy. Since its founding the school had many ups and downs, but in the 1950s it had well over one hundred students.

Until the 1950s Rosthern was the Mennonite center in Saskatchewan. However, many Mennonites have moved into larger cities, and at that time Saskatoon (pop. 72,858 in 1955) had the largest Mennonite population. In 1922 the Canadian Mennonite Board of Colonization was founded with its office in Rosthern and in 1923 the immigrants from Russia started to come in. Up to 1930 over 20,000 Mennonite immigrants came to Canada, mostly from Russia. The Canadian leader of this immigration was David Toews, elder of the Rosenort Mennonite Church in Saskatchewan, who was living in Rosthern. After World War II a new stream of immigrants to Canada set in when J. J. Thiessen of Saskatoon was chairman of the Canadian Mennonite Board of Colonization which had moved to the city of Saskatoon.

The Mennonite Youth Farm, located on the Experimental Farm near Rosthern, was discontinued as such by the government, because the Agricultural Department of the University of Saskatchewan in Saskatoon, only 50 miles south, was doing a similar work. In the winter of 1943-1944 the Experimental Farm with 640 acres was bought by the Youth Organization of Saskatchewan. In 1944 the Invalid Home was opened on the Youth Farm and in 1955 had 80 patients in two separate buildings.

In 1945 the Elim Gospel Beach in South Saskatchewan was bought. In 1946 the first Children's Home on the Youth Farm in Rosthern began and in 1953 another home, the Crippled Children's Home, was opened on the same Farm. Combined these homes were able to take 20 children. In 1949 the pasteurization plant on the Youth Farm was built. In 1955 this Farm had about 30 cows and supplied the town of Rosthern with pasteurized milk. In 1951 the Invalid Home in Herbert, South Saskatchewan, was built by the Youth Farm. It had about 20 patients in 1955. 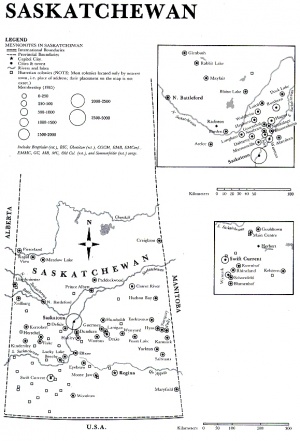 The pressures Mennonites felt in Manitoba and other parts of the world brought many settlers, beginning in the 1890s, to what became Saskatchewan. In addition to the initial settlement at Rosthern, reserves of land were established for the Old Colony Mennonites in the Osler-Hague area (1895) between Saskatoon and Rosthern, and S.E. of Swift Current (1904). They established 29 villages in the two reserves. Settlements of Mennonite Brethren, General Conference Mennonites, Evangelical Mennonite Brethren (now the Fellowship of Evangelical Bible Churches, and Krimmer Mennonite Brethren were also established. Most of these groups settled in districts adjoining or in close proximity to the two reserves. Some of the settlements, however, were more isolated. Members of the Mennonite Church (MC) settled at Guernsey, some Mennonite Brethren settled at Woodrow and Fox Valley, a General Conference community emerged at Drake, and a Sommerfeld group was established at Carrot River.

The 1920s brought compulsory elementary school education to Saskatchewan, and approx. 3,000 Old Colony, Bergthal, and Sommerfeld Mennonites from Saskatchewan joined 4,000 from Manitoba to establish new communities in Latin America. The new wave of Mennonite emigrants from Russia from 1923 to 1930 filled many of the vacant farms left by the Latin American immigrants. Many new settlements were also established. In the 1920s communities were established in Dundurn, Hanley, Herschel, Fiske, Colonsay, Holdfast, Jansen, and Wilden. Many of these settlements were established on large estates from 400 to 4000 hectares (1,000-10,000 acres) in size.

The third major influx of Mennonites to Saskatchewan occurred after World War II. Those who made up this group of immigrants had suffered through the dispersion in the Soviet Union and other effects of World War II. Many had fled to western Germany at the end of the war, and upon arrival in Canada, settled mainly in the existing Mennonite communities and in the larger cities, particularly Saskatoon.

In 1987 the largest concentration of Mennonites in Saskatchewan was in Saskatoon, with eight General Conference (GCM) congregations, three Mennonite Brethren congregations, and one each of the Evangelical Mennonite Conference, Evangelical Mennonite Mission Conference, and Brethren in Christ. In addition, the surrounding rural area north to Rosthern, NW to Borden, SW to Herschel, east to Aberdeen, and south to Hanley made the general Saskatoon area a very concentrated inter-Mennonite community. The second largest concentration of Mennonites was in the Swift Current area.

Schools have been developed by both the General Conference Mennonites (GCM) and the Mennonite Brethren (MB) since shortly after their arrival. These have included Rosthern Junior College (high school), Bethany Bible Institute (MB), and the Swift Current Bible Institute (GCM), which closed in 1996. An elementary school was developed by the Saskatchewan Bergthal community (Sommerfeld Mennonites) in Osler.

Mennonite Central Committee (MCC) Saskatchewan has become a strong unifying force in the Mennonite communities. Numerous programs and services have been established, particularly in the Saskatoon area. The MCC relief sales in Saskatoon and Swift Current have become important annual events. Outreach in mission and service includes a strong person-to-person program at the Prince Albert Penitentiary. Many Saskatchewan Mennonites have also served as volunteers internationally through MCC.

The importance of combining faith and service is also illustrated in many other ways in Saskatchewan. Homes for senior citizens and nursing homes have been developed in Saskatoon, Rosthern, Warman, and Herbert. Group homes are serving youth and handicapped people in Saskatoon and Swift Current. The Brethren in Christ Church has operated a home for Native school children in Timber Bay (northern Saskatchewan). Home care community-based services for seniors have also been available through province-wide services. Prior to the province-wide service which developed in the early 1970s, the Mennonite communities north of Saskatchewan had already developed such services, open to both Mennonites and non-Mennonites in their communities.

The urbanization of Mennonites in Saskatchewan is increasing. Since World War II increasing numbers of Mennonites have entered professions such as nursing, teaching, and social work. Large numbers entered the trades and worked in the cities. This movement has broadened so that by the late 1980s, Mennonites are involved in a wide range of professions, trades, and businesses. Involvement in the civil service of Saskatchewan and Canada has developed. Many work as professionals in research, in services related to agriculture, social services, health and mental health, and in senior management and policy positions in government. Political involvement on municipal, provincial and federal levels has increased greatly since the time of Gerhardt Ens, who was the first Mennonite member of the Saskatchewan Legislature (early 20th century).

Mennonite communities have continued their integration into the mainstream of provincial life. Participation in public life, politically as well as in public service; involvement in economic structures and systems (business, trades, professions, as well as farming); extensive involvement in education (as students and educators at every level, including a number of professors in the universities at Saskatoon and Regina); and an almost total use of English as the first language have had a major impact on the nature and identity of Mennonites in Saskatchewan.

Some implications of these changes are that many who grow up in Mennonite homes, churches, and communities shift to non-Mennonite denominations. The Christian and Missionary Alliance Church, for example, has many members who come from Mennonite backgrounds. Some shift to mainline churches, e.g., United Church of Canada, has also occurred. On the other hand, many of non-Mennonite background have joined Mennonite churches. These new Mennonites come from mainline Protestant and Catholic churches and various evangelical communities. Major developments with reformulations of identity and theological orientation are in process. Many Mennonite pastors have received their professional theological education in Mennonite schools and seminaries such as those at Fresno, California (MB), and at Elkhart, Indiana (MC, GCM), but many pastors and leaders also are graduates from interdenominational schools such as Briercrest Bible College or Canadian Bible College, or take seminary training on a part-time basis from the Lutheran Seminary in Saskatoon.

Driedger, Leo. "A Sect in a Modern Society. A Case Study. The Old Colony Mennonites of Saskatchewan." M.A. thesis, University of Chicago, 1955.