From GAMEO
Revision as of 09:48, 3 April 2020 by SamSteiner (talk | contribs) (→‎Additional Information: wikified tables)
(diff) ← Older revision | Latest revision (diff) | Newer revision → (diff)
Jump to navigation Jump to search
A checked version of this page, approved on 3 April 2020, was based on this revision. 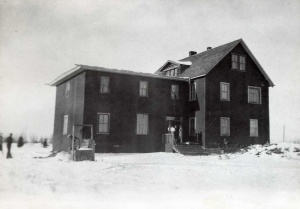 The Rosthern Bible School Building in 1947 showing the flat roofed 1946 addition to the original "Immigrantenhaus" building both with black unfinished creosoted exterior and an outdoor well, the building’s water supply. The building has been demolished.

Rosthern Bible School was located in the town of Rosthern, Saskatchewan, and affiliated with the Conference of Mennonites of Saskatchewan. It functioned from 1932 to 1957, during which 491 students and at least 23 instructors studied and taught. The school positively influenced the spiritual lives of many Saskatchewan youth and led many to become congregation leaders, Sunday School teachers, Daily Vacation Bible School instructors, choir leaders, pastors and missionaries. Over half of the students were women and the school empowered them to take leading role in many congregations and to engage in full time church work.

In 1931 Rev. Jacob J. Nickel pointed out to Ältester Jacob H. Janzen the need in the Saskatchewan Conference churches for a Bible School. Ältester David Toews responded by appointing Nickel as organizer and instructor. On 1 November 1932 the Rosthern Bible School opened its doors for the first time, with nine students and Nickel as teacher. From its beginning it was closely affiliated with the German English Academy (GEA), now known as Rosthern Junior College, the Rosthern-based Mennonite high school. It used an upstairs classroom in the north side of the German English Academy's red brick building. All subjects were taught in the German language, except for the Book of Job which Alvin Thiessen of the GEA taught in English. Some students had received their education in the German-speaking villages in Russia and were fluent in German. For others, however, it was a language heard only during church services, and they found it difficult. Grade nine and 10 students from GEA joined the Bible School students for Bible and catechism studies, and grade 11 and 12 materials came from Mennonite or church history lessons.

The Bible School term lasted five months, October to March, to accommodate rural youth who were needed as farm help for seeding and harvest but could arrange a few months of winter study. Near the end of the spring term the Bible School students visited area churches to present programs. That became an annual event which left an indelible mark on many students as well as the congregations who heard them. 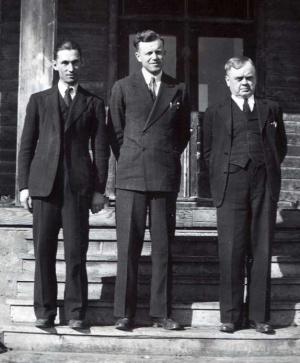 The second year, 1933-34, two subjects were taught in English, "Personal Work" by J. C. Schmidt and "Missions" by Benno Toews. As the years went by, almost all instruction changed to English. The first three years J. J. Nickel was the main teacher, with Rev. John G. Rempel taking leadership in 1935 and continuing for the next 16 years until 1951. In addition to the devotional times and singing periods, the main subjects of instruction were Bible, Old Testament prophecy, ethics, German literature and grammar, catechism, hymnology, Glaubenslehre (Bible doctrine), church (and Mennonite) history and Christian education. The faculty of GEA often assisted in teaching specific courses, particularly in music. For practical experience the students took turns teaching a Bible lesson every Saturday morning at the German school for public school children. On Monday morning fellow classmates and teachers critiqued that lesson.

In the 1930s enrollment increased in both the Bible School and GEA. This lead the Bible School in 1939 to purchase the unused two-story Immigrantenhaus (Mennonite Immigration Building) located at the northeast corner of Rosthern, east of the railway tracks. Renovations and additions were made over many summers to this Bible School building for it had become rather derelict. It also had inadequate dormitory space, so most male students lived in town or at the nearby Youth Farm. A sizable 1946 addition provided space for a male dormitory, library, classroom and office. In 1948 the building was stuccoed. All students were expected to assist with general housekeeping and maintenance tasks.

In the 1939-40 school year a second teacher, Rev. Jacob C. Schmidt, was added. In 1940-41 the third teacher, Isaac Epp with his wife Gladys, also acted as house parents for the girl’s dormitory. In 1942-43 the alumni organized their first project to raise funds for needy students. The Bible School’s yearbook, The Torch, first published that year. Previously the GEA’s yearbook, The Link, included information on the Bible School. Henry T. Klaassen, who began teaching in 1946 for eleven years, was the first permanent teacher at the Bible School who was not first a teacher in Russia.

Rosthern Bible School's objectives were  to impart a deeper understanding of the Holy Scriptures and Christian life; to provide a more adequate knowledge of church and Mennonite and Anabaptist history; to foster good singing and cultivate an appreciation for church hymns and chorales in German as well as in English; to prepare young people for work in their home churches where they could be active in the Sunday School, Christian Endeavor programs and in the preaching ministry and to have a vision for home and foreign missions.

World War II brought many changes to the prairie communities which included a need for new directions in religious education. By the 1940s the Rosthern Bible School was well established, with independence from the German English Academy. It had ambitious plans. It purchased its building from the Canadian Mennonite Board of Immigration in 1945, maintained its own treasury, fund drives, promotions and its own student, alumni and graduation organizations. The Bible School began sponsoring Sunday school teacher’s conferences and many of its students worked through the Saskatchewan Mennonite Youth Organization at local summer Bible schools. In 1945 the Conference of Mennonites in Saskatchewan decided to found a höhere Bibleschule (a higher Bible School) for post-high school graduates in Rosthern. Unfortunately the decision's implementation was delayed by budgetary constraints and the unwillingness of the German English Academy Board to allow its property to become Conference of Mennonites in Canada property. In 1947 when faculty and facilities became available through Bethel Mennonite Church in Winnipeg, Manitoba, the Canadian Mennonite Bible College was founded thus ending the ambitions of the Rosthern Bible School. Improved transportation, a stronger desire from congregations for university and seminary trained pastors and a movement of many Mennonites from rural to urban habitation led to a decrease in enrollment at the Rosthern Bible School. The Canadian Mennonite Bible College also contributed to a lessened need for a Bible School education. After the Bible School closed in 1957, the GEA maintained a separate Bible Department for a number of years.

(The blanks in: “Years as student” notes that they were not RBS alumni but spouse was.

The blanks in: “Place served” indicates pastor served in many different congregations.)

Rosthern Bible School dates back to 1932, when it was established as a supplement to the Rosthern Junior College, then called the German-English Academy. For the first three years Jacob J. Nickel of Aberdeen taught this school, which had a term of about 5 months (November-March). In later years a month was added. In 1935-49 John G. Rempel served as principal of the Bible School. The number of students rose from about a dozen to over 50. In 1939 the Bible School moved into a separate house. H. T. Klassen was the principal of the Rosthern Bible School in the late 1950s. In 1956 it had 25 students.