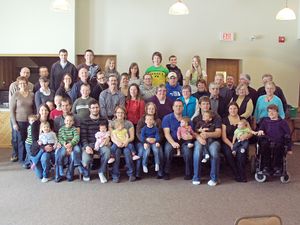 When leadership for the group failed to develop, the Rosenort Evangelical Mennonite Church was asked to help. It began to conduct Vacation Bible School in the area. Shortly after graduating from Steinbach Bible Institute, Dave Harms, was elected as a minister at the Rosenort EMC. The Rosenort EMC missions committee approached Dave Harms to serve at Roseisle. On 14 March 1960, he held his first service in Roseisle, and returned to Rosenort EMC for an for an evening service where he was ordained.

Dave Harms was largly a self-supporting minister, giving credit to the Lord that for the provision received for himself, wife Katie and their family of four daughters. His brother Henry Harms provided them with a house, meat, and work in his building moving business. Dave Harms also worked as a school bus driver, a hardware clerk, and a hospital orderly.

Randall and Faith Krahn, former missionaires in Mexico, then came in 1994. During the time of Randall Krahn’s pastorate, in 1998, the congregation began the construction of a one-level, 6,400 square-foot steel building. The sod-turning was on 28 June 1998. The building was dedicated on 8 October 2000. Kelly and Karen Lesser began serving in Fall 2004 and ten years later the church held a farewell for them on 29 June 2014. Kelly and Karen were known for their music ministry, and, Kelly also coached high school volleyball. He was known for his challenging sermons and involvement in committees, Bible studies, and community events. In August 2014 Kelly became the pastor of the Morden EMMC.

Paul and Kaylee Walker began as pastoral couple in 2015. Paul had a Pentecostal Assemblies of Canada background and hels an undergraduate degree in pastoral ministry from Horizon College and Seminary.