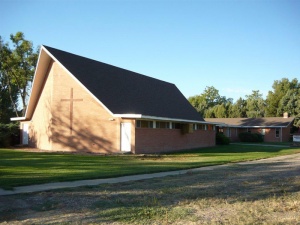 The Rocky Ford Mennonite Church had antecedents in the Mennonites who moved to Rocky Ford, a small town in the Arkansas Valley of southeast Colorado, to work in the town's Pioneers Memorial Hospital. Built by the community, the hospital was leased to the Mennonite Board of Health and Welfare for administration in 1954. Soon after the hospital was dedicated in August 1954, a Voluntary Service unit was established at Rocky Ford and remained in operation until September 1968. Allen H. Erb served as the hospital's first administrator, and Victor Esch served in that capacity from 1958 to 1966. In 1963 plans were developed to build a 30-bed nursing home adjacent to the hospital which would be community-owned but operated by the Mennonite Board of Missions and Charities.

Many of the workers who lived in Rocky Ford initially commuted to the La Junta Mennonite Church for worship, but the vision for a local congregation to conduct outreach in the community slowly began to emerge. Mennonite hospital employees at Rocky Ford met occasionally for prayer meetings as early as 1954. However, serious discussions concerning establishment of a new congregation did not begin until October 1959 when an informal meeting was called by J.D. Graber, E.M. Yost, and Allen H. Erb for persons interested in exploring the possibilities of organizing a church with the aid of the Mennonite Board of Missions. At a subsequent meeting on 9 March 1960, it was unanimously decided to organize a congregation. Regular services began in the hospital chapel (which originally had been constructed with funds provided by a Buddhist group) in June 1960, and the church was officially organized on 1 January 1961, with 30 charter members, 13 of whom transferred their membership from the La Junta Mennonite Church. Later that spring John and Ellen Oyer responded to the congregation's call, and John was installed as pastor and as hospital chaplain on 17 September 1961. John Oyer served as pastor of Rocky Ford Mennonite Church until the summer of 1974. In 1961 the congregation became a charter member of the Rocky Mountain Mennonite Conference.

Two acres of land on the east side of Rocky Ford were purchased during the summer of 1961 on which the new congregation began construction of a church building. An educational wing was dedicated on 15 July 1962, and the main auditorium and additional classroom and office space were dedicated on 18 April 1965.

Mennonites in the Mountain States region began conducting an annual Rocky Mountain Mennonite Central Committee Relief Sale in 1976. During 1976-79 the annual sales were held at the Rocky Ford Mennonite Church; since that time they have been conducted at the Arkansas Valley Fairgrounds in Rocky Ford. After the La Junta Mennonite Church closed on 1 September 1984, most of the congregation's members transferred to other Mennonite churches in the Arkansas Valley, including the Emmanuel, Rocky Ford, and East Holbrook Mennonite congregations. In 2006 the congregation became a charter member of the Mountain States Mennonite Conference. In 2007 the church had an average attendance of 40.

The Rocky Ford congregation closed in October 2017 due to changing demographics in the community.