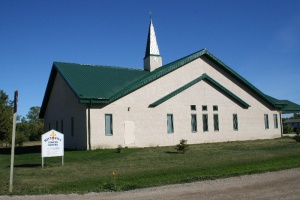 By 1960 there was a year-round Sunday School and services were held bi-weekly on Sunday nights. A small building was purchased and moved into town. A larger building was later built; it was dedicated on 23 July 1961. By 1961, with Aaron D. Friesen as leader, there were six Sunday School classes with a total enrollment of 70 students. Programs and services were each held twice monthly on alternating weeks.

In 1966 the EMC Board of Missions took on the work’s oversight, and Alfred Friesen became interim pastor. In fall 1966 Edwin and Violet Wright took up the pastorate. In the summer of 1967 the chapel gained a basement and an extension to its entrance. Then a larger, singtle-storey building was constructed, and it began to be used in December 2001.