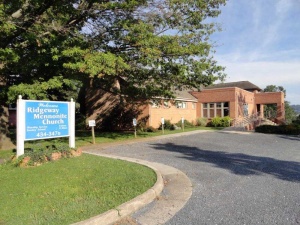 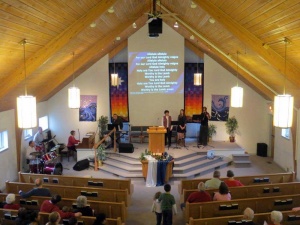 Located atop a ridge of red clay and limestone running through the eastern part of Harrisonburg, Virginia, Ridgeway Mennonite Church received its name from the original church building’s location on the slope of the ridge “because you go past there to get to the ridge.”

The ridge was historically known as Red Hill and the early beginnings of a Mennonite church in the area were sometimes referred to as “the light on the hill.” This phrase was aptly chosen as the title of a history of Ridgeway Mennonite Church written in 1984 by two daughters of long-time pastor Daniel Smucker: Karen Smucker and Jean Smucker Fisher.

Ridgeway developed from an outreach effort of the Young Peoples Christian Association of Eastern Mennonite College (EMC) in the late 1930s. This work, first begun in another part of the city, was known as the Harrisonburg Mission and sought to attract people from the Red Hill area as well. However, those folks expressed interest in seeing church services provided on the hill. These requests eventually resulted in street meetings and cottage meetings being provided to meet this need.

As the work on Red Hill continued, the Virginia Mennonite Mission Board became interested, and in 1945 appointed a committee to work with Moses Slabaugh, who had led the initiative, to give further direction to the effort. Within little more than a year, the Mission Board purchased land, constructed a building and assigned other personnel to lead the congregation, including numerous EMC students during those early years.

The appointment of Daniel Smucker, Jr. and his wife Frances as superintendents of the Red Hill Mission in 1946, and the subsequent use of the newly constructed church building were landmark developments. Two years later the congregation changed its name to Ridgeway Mennonite Church and became an official member of Virginia Mennonite Conference. In 1952 Smucker was ordained and installed as pastor. He and Frances served with distinction and appreciation until 1981.

In the early 1960s, with both the congregation and the surrounding community in a growth mode, the original building was deemed inadequate. Plans for a new building commenced, resulting in its completion and dedication in November 1966. That building, near the site of the one it replaced, served the congregation for the next 25 years. Continued growth dictated the need for additional space and facilities. An addition to the existing building was dedicated in June 1991. This facility continued to serve the congregation of approximately 160 members in 2013, along with a Hispanic congregation which has shared the building since 2003.

A succession of pastors, mostly interim positions, led the congregation after Dan Smucker’s retirement in 1981, with Smucker himself filling a couple of those positions. In 1988 John Kiblinger began an 11-year tenure with the assistance of several associate pastors, including Lee Ebersole who served the congregation from 1995 to 2004. Following Kiblinger’s resignation in 1999, Richard Headings was called to pastor Ridgeway, and installed in July of 2000.

Headings was an experienced pastor, having served pastorates in Oregon, his home state, and in Kansas, and was seen as a good fit for Ridgeway. Three years into that calling however, the congregation and his spouse, Dorothy (Yoder), tearfully bid farewell to Richard who succumbed to an early death from cancer in June 2003.

A year later Ben Risser, Jr. responded to Ridgeway’s invitation to serve the congregation. Ben and his wife Kathy (Souder) were long-time residents of the Harrisonburg area, Ben having completed seminary training at Eastern Mennonite Seminary in 2004. Under Risser’s leadership, Ridgeway is a growing, giving, and gracious congregation, seeking to spread the aroma of Christ to the world it touches. Its stated purpose is “to love God and all people, enabled by the Holy Spirit to become the living presence of Jesus Christ in our homes, across the street and around the world.”

A variety of programs have characterized the congregation’s efforts to fulfill that purpose. These include a Kid’s Club designed to reach children in the neighborhood surrounding the church, two MYF groups, a young adult fellowship, a Sister Care ministry, a men’s Bible study group, and a Prime Timers fellowship.

Smucker, Karen and Jean Smucker Fisher. The Light on the Hill. (Harrisonburg, Va.: The Church, 1984).

Ridgeway Mennonite Church (Mennonite Church), Harrisonburg, Virginia, established in 1949, is a mission station under the Virginia Mennonite Home Mission Board. In 1957 Daniel M. Smucker, Jr., was pastor of its 12 members. -- Melvin Gingerich.