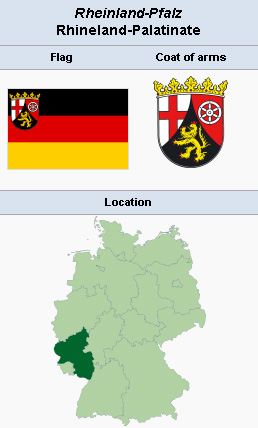 Rheinland-Pfalz (English, Rhenish Palatinate or Rhineland-Palatinate) Federal State, Germany was formed on 30 August 1946 by order of the French military government. It was formed from the northern part of the French Occupation Zone, including the southern parts of the Prussian Rhine Province (including the district of Birkenfeld which formerly belonged to Oldenburg, and the government districts of Koblenz and Trier), parts of the Prussian Province of Nassau, parts of Hesse-Darmstadt (Rhinehessen on the western banks of the Rhine), and the Bavarian Rhenish Palatinate (essentially the core of Kurtrier, Kurmainz, and Kurpfalz). It was formerly divided into three administrative regions: Koblenz, Trier and Rheinhessen-Pfalz, but is now divided into 24 districts.

Statistics for the old Mennonite congregations in this area follow:

There are in this area about 2,600 members of local old Mennonite families and 1,000 recent addi­tions, mostly refugees from West Prussia. The in­crease occurred principally in the congregations of Neuwied (formerly closely associated with Krefeld in the Rhine Province), Weierhof, and Monsheim. The loss in the Deutschhof congregation is due to the fact that the Alsatian part, Geisberg, became in­dependent; the loss in the Zweibrücken congrega­tion is due to the fact that the members living in the Saar area had to form an independent organization. Almost half of the German Mennonites are now living in the two Rhenish states, as a regional survey clearly shows:

The churches in Deutschhof and Ludwigshafen, which were destroyed in World War II, were restored in 1949-50. In the area of Rheinland-Pfalz two homes for the aged were built, especially for the refugees from West Prussia, viz., Leutesdorf, near Neuwied, and Enkenbach, near Sembach, in 1949-50. In 1955 the refugee settlements in Niederbieber and Torney, near Neuwied, built a church besides the one in Neuwied, which belonged to the small original congregation. Since the school at Weierhof (see Realanstalt am Donnersberg) was not released by the occupation authorities, an organization was formed which opened a dormitory (Schülerheim) in Kirchheimbolanden for Mennonite (and other) students attending the secondary school in that town. Refugees were not admitted into the French zone until 1948. In that year they began to come into the Palatinate and were assisted by American relief. The settlement in Neuwied (Niederbieber/Torney) was begun in 1949, the one in Enkenbach in 1953. An organization to help refu­gees get settled (Genossenschaftliches Flüchtlingswerk), founded at Weierhof  in 1949 by Otto Zerger and Johannes Driedger, included local Mennonites and refugees who wished to settle, for the purpose of support in assuming rented farms. Thus, on the Offweilerhof near Zweibrücken three farms, called "Werderhof," were established, and by 1954 thirty Mennonite refugee families had been helped to find homes and a chance to earn a living. The association called Mennonite Settlement Aid (Mennonitische Siedlungshilfe) serves a wider clientele; it originated in Ludwigshafen on 24 July 1953, under the direction of Fritz Stauffer. The HVDM (the relief organization of the Vereinigung), the corporation Mennonite Homes for the Aged (Mennonitische Altersheime), and the vol­untary service organization MFD (Mennonitischer Freiwilligendienst) maintain a common office with Mennonite Settlement Aid in Ludwigshafen, headed by Richard Hertzler. The chairman of the German Mennonite Missions Committee is Abra­ham Braun, former pastor of the Ibersheim congre­gation.

Various conferences and committees have resumed their activities. The Conference of the Palatine and Hessian Mennonite Churches meets annually either in Neustadt an der Weinstrasse or Ludwigshafen. Since 1953 the congregational ministers and leaders of the Palatinate and Hesse have been meeting annually for a study conference. In 1950 the fourth edition of the hymnal (see Hymnology) was published. There have been conferences for youth, and at Monsheim one for the aged. The Gemeindekalender has been edited by Paul Schowalter, pastor of Weierhof, and the Mennonit by Gerhard Hem, pastor of Sembach. Several ministers have retired: Johannes Foth in 1953, at the age of 75; Emil Händiges in 1951, at the age of 70; he was succeeded by Alexander Prieur in 1954; Hugo Scheffler who immigrated to Canada in 1951 was replaced by Theo Hotel. Abraham Braun has been succeeded by Dan­iel Habegger, who served as his assistant 1952-57. In Neuwied, Otto Wiebe, formerly a preacher of Heubuden, became the elder.

After World War II, the influx of refugees from West Prussia led to the establishment of the Mennonite congregation in Enkenbach, the largest Mennonite church in Rheinland-Pfalz (496 members). The congregational life of the Palatinate churches was enriched by American sisters and brethren, who assisted in every respect, including the construction of housing for Mennonite refugees at Enkenbach. In the 1960s a more intense coordination of the work of local congregations began. The salaried preachers met six times a year and, besides other services, compiled several publications: a manual for baptisms, burials and other ceremonies, and statements on biblical interpretation, etc., the mode of baptism, and the understanding of ministry. In most churches lay preachers were serving in addition to the salaried preachers. This indicated a shift toward more emphasis on the priesthood of all believers. While most efforts during the 1950s and 1960s centered on the congregations, interest in outreach also grew, as was evident in the missions at Neumühle (1977) and Kaiserslautern (1982). The retirement and nursing home at Enkenbach was regarded as commitment of love towards a society neglecting senior people. The boarding school at the Weierhof offered opportunity for educational ministry by church members. The third Mennonite European Regional Conference was held at Enkenbach in 1981.