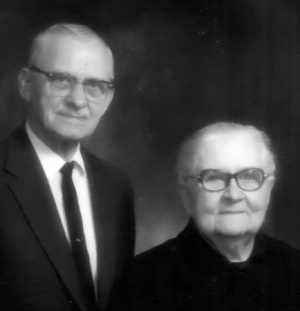 Nickolai N. Reimer: businessman; born 6 February 1894 in Franzthal, Molotschna Colony, South Russia to Nickolai N. Reimer and Maria (Pankratz) Reimer.  He was the sixth of nine children, preceded by five sisters and followed by three brothers. On 24 May 1922 he married Sara Peters (14 March 1894, Pleshanovo, Neu-Samara, Russia - 29 August 1987, Abbotsford, British Columbia (BC), Canada).  She was the daughter of Abram and Margaretha Peters. Nickolai and Sara had five children: Margaret, Nick, Frieda, Mary and Hilda. Nickolai died 20 December 1992 in Clearbrook, BC.

Nickolai's formative years were spent in the new settlement called Terek, located in the Caucuses in southern Russia. Life was difficult for the adults but during this time Nickolai, as a young boy, developed a love and interest in plants. By chance he discovered an old reader describing how trees were cultivated and grafted. His interest was sparked and he tried experiments with apple, mulberry and apricot trees.  He had failures and successes with his ventures but saw enough hope in his grafts to decide to start a small nursery with his brother Heinrich. Unfortunately, it would be many years before he would realize his dream of having his own nursery.

Nickolai was baptized in 1916 and served as a medic in the Russian army on the Turkish front during World War I. After marriage to Sara the couple moved from Terek to Suvorovka. Then in 1924 they fled Russia and migrated to Herbert, Saskatchewan. They moved to a farm in Langham, Saskatchewan in 1925. Severe winters and several crop failures persuaded Nickolai to relocate his family to Yarrow, BC in 1928, where they became charter members of the Yarrow Mennonite Brethren Church.

In Yarrow Nickolai and Sara were able to raise their young family and Nickolai was finally able to pursue his life's ambition--to be a gardener and a nurseryman. His brother-in-law discovered 25 wild shoots growing under his apple tree and asked Nickolai to try to graft them, which he did successfully. Two years later each of them had 12 apple trees. Nikolai continued to talk about his dream of a nursery until finally his wife said, "If you are so interested in a nursery why don't you start one?" So in 1937 he started what became Reimer's Nurseries with 300 fruit tree seedlings. While he successfully grew trees and ornamental shrubs, his first love was the cultivation of flowers. Despite setbacks of flood and frost, he persevered and built a business that in 2006 was operated by his grandsons. He was known for his strong work ethic and positive disposition. In the early years Reimer's main clients were local Mennonite farmers in Yarrow and Greendale, who came to him to purchase fruit trees and roses.

Nickolai's life was marked by a love of God, a love of plants and honesty in business. He had a strong sense of accountability to God and man--a verbal promise was a legal contract. When he was 95, Nickolai was asked whether he would like to live his life again.  "Yes, if I could again be a gardener" was the answer.