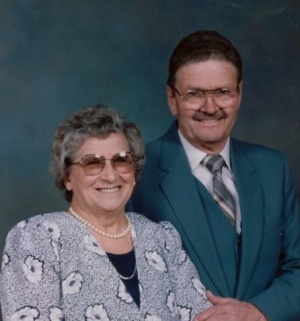 In June 1925 John with his family sailed on the ship called “Rotterdam” to Vera Cruz, Mexico where they arrived after six weeks on 10 July 1925. Mexican culture was difficult for the Europeans to understand and the food was very different. Language was also a big problem. Their few possessions quickly disappeared when they were not watching. However, they settled down and established a livelihood. John’s mother died when he was just 4 years old and she was buried in Mexico.

After three years the family got in touch with a friend in Renata, British Columbia and were able to get tickets to British Columbia for the family and Aunt Josephine (who later became the stepmother). Growing up in the Kootenay Valley on the shores of Kootenay Lake was much more pleasant than Mexico.

John’s youth was spent in Yarrow, British Columbia and then in nearby Coghlan on a farm. This was also where Daniel and Anna Schmidt had established their residence after coming from Russia. Their daughter, Martha, became John’s friend and for many years they courted. They were married in 1945.

John was baptized in the Coghlan (now Bethel) Mennonite Church in 1942 after a commitment to the Lord Jesus as his personal Saviour and Lord. His post-secondary education included a Bachelor of Arts degree from a Christian college in Portland, Oregon. John served as a conscientious objector during World War II. After the war he came back to farm in Upper Sumas, was baptized by immersion and became a member of the Clearbrook MB Church in 1944. Here he was later ordained for the pastoral ministry.

Reimer served the Mennonite Brethren (MB) Church tirelessly and with great dedication: he planted the first church in Harrison Hot Springs – Harrison Gospel Chapel, serving from 1952 until 1957; became Field Director for the West Coast Children’s Mission in 1957; pastored Mountview MB Church in Stoney Creek, Ontario from 1963 to 1967; was the first paid pastor of the Steinbach MB Church (which during his pastorate changed from German to English in their services) from 1967 to 1974; served as Field Director for the Saskatchewan MB Conference; pastored Harrison Gospel Chapel from 1979 to 1985, and pastored Dalmeny Community Church from 1985 to 1989. John concluded his ministry career at Leamington MB Church, where he served as interim pastor. While here he had a major heart attack in 1993. However, his health was restored and he was able to enjoy another eight years with Martha and the family.

After retirement John continued to minister in various ways wherever God opened the doors. He blessed many churches as interim pastor and preached wherever he had opportunity.

John loved serving as a minister. Even when the family went on holidays John would often agree to preach the morning service where they were visiting. He never took time off from ministry. John enjoyed some of the side benefits of pastoring such as fishing and hunting with members of the congregation. Many hunting trophies decorated their home (including a large bear rug). He was also adept at carpentry -- constructed and renovated their homes and reconstructed the churches where he served. He enjoyed a good joke. Laughter and a big smile were a natural part of his life.