From GAMEO
Revision as of 23:22, 3 March 2020 by RichardThiessen (talk | contribs)
(diff) ← Older revision | Latest revision (diff) | Newer revision → (diff)
Jump to navigation Jump to search
A checked version of this page, approved on 3 March 2020, was based on this revision. 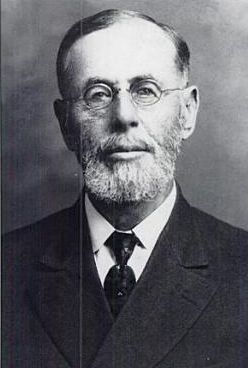 Jacob Wilhelm Reimer: a noted Mennonite Brethren (MB) preacher and Bible expositor in Russia and Canada; born 9 March 1860 in Alexanderkrone, Molotschna Mennonite Settlement, South Russia, the son of Wilhelm and Helena (Klassen) Reimer. Reimer was married twice. In 1887 he married Gertrud Neustädtler (d. 1920) and settled in Rückenau. They had six sons and four daughters. His second wife, whom he married in 1923, was Margaret (Peters) Rempel. In October 1942 Reimer moved to Sardis, British Columbia, where he died on 6 March 1948, and was buried in the local cemetery.

Jacob entered the Ohrloff Zentralschule at the age of 13. At 17 he began to teach in Mennonite schools, where he continued to work for six years. He was converted at the age of 23 through the preaching of F. W. Baedeker of England, who was at that time visiting South Russia. He resigned from the teaching profession, joined the Mennonite Brethren (MB) Church through baptism, and began to preach, gaining a most remarkable knowledge of the Bible through intensive study.

The MB Conference in Russia appointed Reimer as itinerating minister (Reiseprediger) and ordained him to the ministry in 1900. He had a most effective period of ministry for 35 years and conducted meetings in all the MB congregations in Russia as well as among many other circles, his tours extending to Turkestan and to the Siberian Mennonite settlements. Seventeen times he visited the Kuban settlement in the Caucasus; twice he visited Germany, serving as Bible lecturer at the Blankenburg conferences. He also found open doors for preaching among influential circles in St. Petersburg. For some time he accompanied the evangelist Baedeker as his interpreter. In 1899 he visited America and held meetings in many MB churches. In 1913 Reimer was largely instrumental in establishing the Mennonite Zentralschule in his native Alexanderkrone, and served on its board of directors (Schulrat) until the Revolution.

In July 1924, J. W. Reimer and his second wife immigrated to Canada, making their home in Ontario for four years; then after a stay of ten months in Winnipeg they settled in Steinbach, Manitoba.

In Canada J. W. Reimer, though advanced in years, traveled much and preached in many MB churches. His ministry also extended into other circles. He wrote valuable articles for Mennonite papers. His book Der wundervolle Ratschluss Gottes mit der Menschheit has been widely read. He continued to preach up to his 87th year. He was largely responsible for the widespread introduction of pre-millennialism in the MB Church.