From GAMEO
Revision as of 23:52, 21 June 2016 by RichardThiessen (talk | contribs) (Added categories.)
(diff) ← Older revision | Latest revision (diff) | Newer revision → (diff)
Jump to navigation Jump to search
A checked version of this page, approved on 21 June 2016, was based on this revision. 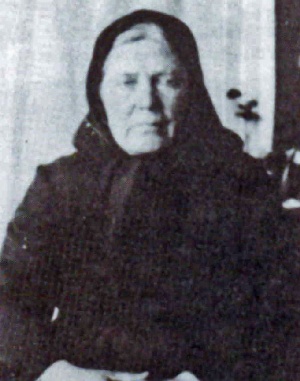 Aganetha Barkman Reimer, Canadian pioneer and midwife, was born 4 August 1863 to minister Jacob (1824-1875) and Katharina Thiessen (1829-1889) Barkman in the village of Friedensfeld, Borozenko Colony, South Russia. She was the fifth of eight children and had one step-sister, Helena Warkentin, from her mother's first marriage. In 1874 at the age of 11, she and her family immigrated to Canada, where they settled in Steinbach, East Reserve, Manitoba.  Aganetha's early years in Canada were not easy. Shortly after arriving her two younger sisters, Margaretha and Anna, died within a month of each other. The following spring her father drowned along with Jacob Friesen trying to cross the Red River on a trip to Winnipeg for supplies. The loss of her father was made even worse for Aganetha when her mother remarried two years later. She and her new step-father, Cornelius  Loewen (1847-1893), did not get along. It was probably due to tensions at home that motivated Aganetha to take on the job of caring for the children of John R. Reimer (1848-1918), a widower in the community. Eventually Mr. Reimer proposed. Aganetha was baptized 27 February 1882 and she and John R. Reimer were married 19 March 1882. Together they had 10 children, five sons and five daughters.

Aganetha began her midwifery career around 1892. The community did not have a resident physician at that time and so the church put out a request for a volunteer to take a three-week midwifery course. Aganetha volunteered in spite of an already busy life and over the years delivered more than 600 babies in Steinbach and the surrounding area. She was also called on to assist with the duties of undertaker, preparing the body for burial when someone in the community died. In addition to all of her many abilities and responsibilities, Aganetha found time to teach her grandson Menno how to swim, something she had learned to do as a young girl in Russia.

In 1918 Aganetha's husband, John R. Reimer, died at the age of 69. Aganetha continued to farm with her youngest son until 1936. She then moved into Steinbach, where she built for herself a small house with a barn on Hanover Street. After a lifetime of good health, Aganetha Barkman Reimer experienced a stroke on the morning of 5 March 1938 and died that night, having reached the age of 75. Harvey Kroeker probably best described her life when he wrote, "She truly was a most remarkable woman, a person of faith and a noteworthy pioneer."