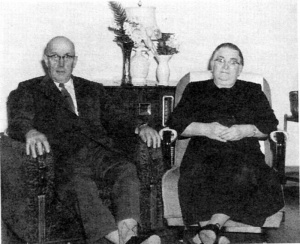 Jacob’s career was influenced by his father’s occupation. Jacob T. Regehr was a farmer and storekeeper in Hochstadt, Manitoba, with a sideline of cheese and butter manufacturing. Jacob E., who liked to be called “Jac,” attended the Manitoba Agricultural College before starting to work at a cheese factory in Winnipeg, Manitoba. At one point in his life, he also took a telegrapher’s course in Des Moines, Iowa so that he could get a job with the Canadian Pacific Railway. Elizabeth’s life, meanwhile, took a very different path; after her family moved from Plymouth to Kleefeld, she finished Grade 8 before taking a job as a maid. She and Jacob met at a youth event in the Kleefeld Church of God in Christ (Holdeman church), and they had a small wedding with only a few close friends attending. Jacob continued his work at the cheese factory for a time after their marriage.

One incident at the cheese factory may have prompted Jacob E. Regehr to obtain employment back among in his home community. It happened when Jacob failed to return from work one day that Elizabeth walked to the factory to try to find him. With the help of a manager, she found that her husband had been inadvertently locked in a refrigeration room. Although Jacob was safe, it wasn’t long before the couple moved to Steinbach, Manitoba, where Jacob began working as a farm equipment salesman. They also joined the Brüderthaler church in Steinbach. Jacob dreamed of moving to California, but as children arrived, they moved to Winkler instead.

Jacob Regehr had always had an interest in travel, and he persisted in his idea of relocating to California. Elizabeth finally agreed to the move, and the family left Manitoba in 1921. Jacob bought a service garage in Winton, California, and Elizabeth soon came to appreciate the abundant fruits available. However, concerns arose over the local church’s request that they be rebaptised to join the church, and they decided to join another Brüderthaler church in Oregon. The move was not a success and they were back in California six months later. After the deaths of two of their children and the birth of another son, they decided to return to family and friends in Manitoba.

Bad roads and heavy rains hampered the Regehr family’s trip to Manitoba, but Jacob, Elizabeth, and their children finally arrived in Steinbach. For Jacob and Elizabeth, however, the difficult journey was worth the trouble as they returned to their own congregation and Jacob started a job selling tractors and cars for J. R. Friesen. When he was laid off because of the Great Depression, Jacob started his own very successful John Deere franchise.

The Regehrs soon became active in the Steinbach community. Jacob was involved in a variety of committees, and for a time he acted as mayor. Jacob and Elizabeth were also active once more in their church, where Jacob enjoyed his work on several boards and committees. Both Regehrs enjoyed music, and they encouraged their children to hold impromptu concerts in the family home on Sunday afternoons. Jacob and Elizabeth continued to travel, touring various parts of North America to see the sights.

Jacob E. "Jac" and Elizabeth Regehr were people of strong character. Although Jacob’s forthright manner sometimes offended people, both he and Elizabeth had a firm faith in God that led them through the many struggles of their lives.