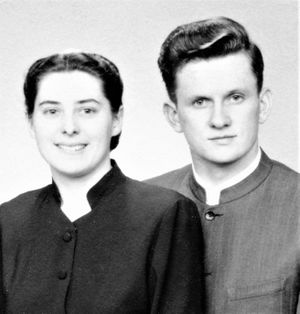 Harold Christian Reesor: mission worker and farmer in Quebec, Canada; born 11 November 1930 on a farm in what is now the Town of Whitchurch-Stouffville, Ontario, Canada to Carl W. Reesor (4 December 1895-30 November 1968) and Annie Wideman Reesor (28 April 1900-12 April 1959). He was a middle child in a family that eventually included 10 children. Harold died 12 March 2017 in Markham, Ontario, close to his birthplace. He is buried at the Rouge Valley Mennonite Church cemetery.

While attending Ontario Mennonite Bible School as a young man, Harold met Pauline Short (2 April 1930-6 April 1980) from Archbold, Ohio, USA. They married 3 September 1955 and moved soon after to the province of Quebec, Canada to serve with the Mennonite Board of Missions. Harold was ordained for the Quebec ministry at the Wideman Mennonite Church in Markham on 29 August 1956.

Tilman and Janet Martin also went with Harold and Pauline to Quebec with Mennonite Board of Missions in 1955. The two couples worked in partnership with Catholics at a time when there was significant tension between Catholics and Protestants in the province. In time, other Mennonites joined their work and they helped to establish congregations in Joliette, Rawdon and Montreal, and the service ministry House of Friendship in Montreal. Their home was a place where people met for food, fellowship, prayer and worship.

After a number of years, Harold and Pauline Reesor transitioned from full time mission workers to making a living on their farm in Mascouche, Quebec. Harold and Pauline continued to support the work of the church and showed hospitality to many. Daughter Rachel recalls, “So many people ate around their table, some for a meal, some joining the family for months or years.” She says the annual corn roast held on their farm for members of the Montreal Mennonite Fellowship (MMF) was “an especially large, celebratory example of that hospitality life style.” Harold and Pauline had 25 busy years together raising seven children, farming and doing church work before her premature death in 1980.

In 1982, Harold Reesor married Alice Deckert (30 April 1935-28 August 1999), a teacher from Saskatchewan. They were active in supporting the MMF and House of Friendship for 15 years before moving to Stouffville, Ontario in retirement. They became members of Community Mennonite Church of Stouffville, part of Mennonite Church Eastern Canada. In 1999, Harold experienced another loss with the death of Alice.

The last 15 years of his life were full. Harold Reesor married Stella Witmer Reesor (1931- ), the widow of his brother Elmer, in 2001, and between them, they had 13 children and many grandchildren to love and support. Stella and members of both families were at his side at his death.

Harold Reesor was known for speaking carefully, seriously and articulately yet often his wry sense of humour was in evidence. He was a man of faith who cared deeply about justice issues and modelled walking humbly with God.