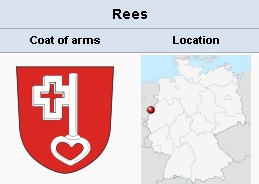 Rees, a town (1944 population, 4,792; 22,559 in 2005) on the Lower Rhine, located in the former duchy of Cleve, Germany (coordinates: 51° 46′ 0″ N, 6° 24′ 0″ E), in which there was once a Mennonite congregation. Little is known concerning this church and its history, since the church records were not preserved. Mention is made of a Mennonite congregation in Rees as early as 1570 in a letter by Hans Busschaert. On 1 May 1591, Louijsz Boudewijns, very likely a Flemish immigrant, signed the Concept of Cologne  for the Rees congregation. Until 1680 it was an independent congregation with preachers, deacons, and elders. On 6 August 1680, Jakob Welsing of Rees married Helene van Voorst, the daughter of the minister of the Emmerich congregation. Later the congregation gave up a measure of its independence, for although Jakob Welsing is named as the preacher of Rees, its baptisms and most of its marriages were solemnized at Emmerich. The congregation later became independent again for a time. The Naamlijst of 1731 names the following as preachers of Rees: Harmen Leendertz from 1707, Pieter Koenders 1727, Isaac Welsin(g)k 1727; the Naamlijst of 1743 states that these three preachers had died, Hendrik Welsing being the only preacher of the Rees congregation at that time. He served until 1761-62 and was the last preacher of Rees. The Emmerich records for this period contain no entries concerning Rees. On  11 February 1738, Rees purchased a house and land on Deelstrasse, sold the house, and built a church on the site of the barn (archives of the town of Rees). At that time it was one of the small Mennonite congregations. In 1721 its share of the recruiting fee levied on the six Mennonite congregations of Cleve-Mark was fixed at 10 per cent of the total. In 1752 certain Rees members were again mentioned in the Emmerich church records. The membership continued to decline, and died out in the first half of the 19th century. The church on Deelstrasse stood until the end of 1944.

The Mennonite families in Rees in the 18th century were Rave(ns), Welsing, Korsten, Leenders (Leendertz), Braakman, van Zutphen. Some were buried in the Protestant cemetery, and the rest in the Catholic cemetery.