From GAMEO
Revision as of 14:32, 7 December 2013 by SamSteiner (talk | contribs) (Update MC USA Archives link)
(diff) ← Older revision | Latest revision (diff) | Newer revision → (diff)
Jump to navigation Jump to search
A checked version of this page, approved on 7 December 2013, was based on this revision.

During World War I, as early as November 1914, English Quakers had begun reconstruction work in war-devastated areas of France. In April 1917, the month in which the United States entered the war, the American Friends Service Committee was organized at Philadelphia, Pennsylvania. In June a commission of investigation was sent to France following which an American Friends Service Committee reconstruction unit was set up under the general direction of the civilian service of the American Red Cross.

In July 1917 a unit of 100 men, including one Mennonite, was gathered at Haverford, Pennsylvania, to be trained for the French service. It was the hope of the American Friends Service Committee that this service would be recognized by the War Department as noncombatant service. On 4 September 1917, 54 of the Haverford unit men, including the Mennonite, started for France, with the understanding that any men subject to the draft could be called back. In March 1918 the War Department declined to recognize the project for purposes of assignment, but Congress enacted the "furlough law" providing that men in the army might be furloughed for other essential work. The War Department now applied this law to the conscientious objectors and by the close of the war 1,300 COs in the army had been recommended for furlough, of whom 200 (including a number of Mennonites) were assigned to the American Friends Service Committee.

In January 1918 the Mennonite Relief Commission for War Sufferers (Mennonite Church) (MRCWS) took official action to support the American Friends Service Committee project in France and began processing Mennonite applicants for this service. By the close of the war (11 November 1918) less than a dozen Mennonites had arrived in France, but after the armistice the men were processed more rapidly, and eventually 54 Mennonites joined the AFSC reconstruction unit, a number of them following release from prison at Fort Leavenworth. Those who had gone to France as furloughed soldiers were given their discharges at discharge camps in France and then continued with the  American Friends Service Committee as civilians.

In 1919-20 the American Friends Service Committee headquarters were located at Grange-le-Compte, an estate near Clermont-en-Argonne. From Grange-le-Compte and its subsidiary warehouse refugees and war sufferers were supplied with food, clothing, and various forms of first aid. An important part of the work was the construction of temporary prefabricated housing for the homeless; in many cases whole villages had been wiped out. Before the Mennonites arrived the Quakers had built 543 such homes and repaired others in the Marne-Somme area. In 1919 the AFSC was assigned 40 villages in the Verdun area and later the assignment was enlarged. In the village of Neuvilly, where a number of Mennonites were stationed, 70 houses were built. In comparison with other areas the American Friends Service Committee construction work advanced the return of the refugees to their villages by at least a year.

The  American Friends Service Committee agricultural department introduced machinery to restore ruined land to cultivation, and distributed young fruit trees, rabbits, chickens, goats, sheep, bees, and hatching eggs to enable farmers to begin their work. When the French program ended on 1 April 1920, most of the Mennonites had been with the service a year and a very few two years. Several gave additional service with the American Friends Service Committee in other parts of Europe. (See Relief). 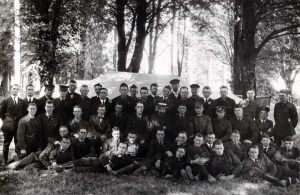 Conference of Mennonite Reconstruction Workers, June 1919. In center with straw hat is Pierre Sommer; next to right is S. E. Allgyer and next is N. E. Byers. Extreme left, standing is Eli Stoltzfus and next is Payson Miller. D. C. Kauffman is lying in front row, feet to left, head in spot of light.
Scan courtesy Mennonite Church USA Archives-Goshen IV-10-7.2, Box 3/42

In the summer of 1919 S. E. Allgyer and Vernon Smucker visited the French project as representatives of the MRCWS. They visited the various work units, held religious services with the Mennonite men on a number of successive Sundays, and on June 20-22 attended a conference of Mennonite reconstruction workers at Clermont-en-Argonne. Smucker then sailed for home on July 6, while Allgyer spent two weeks with the French and Alsatian Mennonites. He then went to Paris with A. J. Miller, J. C. Meyer, and J. Roy Allgyer, where from July 30 to August 2 they interviewed a number of government officials and relief administrators including Herbert Hoover of the Allied Food Commission regarding further opportunities for relief work in Europe. Allgyer sailed for home on August 9 and following his report the MRCWS appointed A. J. Miller and J. Roy Allgyer to investigate further relief needs in Europe, and these two men named A. E. Hiebert as the third member of the committee.

A significant outcome of the Mennonite work in France was the visits of reconstruction workers and of S. E. Allgyer with the French and Alsatian Mennonites. Pierre Sommer at the conference at Clermont-en-Argonne in June 1919 appealed for help from America in rebuilding the scattered Mennonite congregations in France. The conference then asked the Mennonite Board of Missions and Charities (Mennonite Church at Elkhart) to "consider the advisability of rendering to these churches such personal help as could be given in this their time of great need." In addition, S. E. Allgyer was also asked to present this matter to the Mission Board personally. It was not until 1927, however, that the Board took action in this matter.

The French reconstruction work represents a significant event in recent Mennonite history. The young men who served in the project regarded the manner in which the church supported the new relief program as "the crucial test of her sincerity" with respect to nonresistance and they believed that "the future of the church is closely related to the present problem of reconstruction." In evaluating the Mennonite contribution to the American Friends Service Committee program Rufus M. Jones said: "The young men stood the test of the [military] camps with insight and with much bravery. They had the backing of their church and they were conscious that they were its standard bearers. They became closely united in fellowship with our men in the camps and they shared with them the desire to make a positive contribution to service abroad. . . . They were excellent workers and they brought a fine spirit of devotion and co-operation to the mission." The American Mennonites contributed a total of $291,000 for the support of the French reconstruction work.