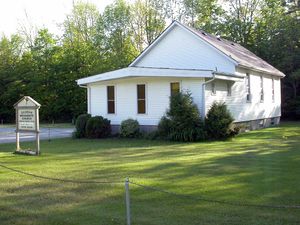 Jacob Hoover was born in York County, Pennsylvania, in 1729. In 1792 Jacob Hoover when he was 63 years of age, with several sons travelled to Ontario, Canada by horseback and purchased 2,500 acres of land along the north shore of Lake Erie, near the village of Selkirk. In 1793 the families traveled by Conestoga wagon to their new home, crossing the Niagara River by ferry at Fort Erie and fording the Grand River near Dunnville.

Most of the land had been granted by the Crown to Captain John Dochstader in payment for services rendered. The Dochstader land was purchased in the name of David Hoover who transferred it to members of the Hoover families including the sisters and their husbands. David Hoover kept for his personal use, lots 4, 5 and 6 in Rainham Township. A deed, dated 1836, shows that a little more than one acre of lot 5 was given to the Mennonite Society (specifically Benjamin Hoover, Henry Miller and John Fry) for a church and cemetery. As was customary at the time, the land was not officially registered until 1846.

Rainham Township was very sparsely settled before 1816, but soon after that families moved there from other areas such as Vineland and Niagara. Family names came to include Shank, Swartz, Strickler, Sherk, Werner, Miller and Byer. At that time it was the only church in the township. Michael Shank is listed as the Mennonite preacher in 1816.

The Old Order split in 1889 was very divisive in this congregation. Leonard Hoover, the minister supported Christian Gayman, the local bishop from the neighboring South Cayuga congregation, who stood firmly on the Old Order side. Several families were opposed, they wanted to remain affiliated with the Mennonite Conference of Ontario and the congregation was divided, leaving both groups small in numbers. The Old Order group dwindled slowly through the 20th century and finally closed in 1955.

Moses Hoover, an older man, was ordained minister for the progressive group at Rainham in 1893, and also served the nearby congregation of South Cayuga. Because of his indifferent health, a series of men helped serve the congregation, sometimes for a year at a time.

Rainham Mennonite Church is still using its 1870 building, although it has been renovated a few times. The original building had separate entrances for men and women; it had two wood stoves at each side with a centre chimney. Gas lights were installed in 1908 and they were replaced by electric lights in 1935. Horse sheds stood along the north and west sides of the building.

A major renovation came in 1957 when a basement was constructed under the existing building and a furnace was added. A few years later new pews, purchased from The First Mennonite Church in Vineland, were installed. The year 1967 saw major changes with an addition to the front of the building providing a new main entrance and a basement kitchen. An organ was also purchased that year. In the late 1970s new windows were installed, the sanctuary redecorated and a piano was placed in the sanctuary. In the early 1980s a new roof and new siding were installed. The cemetery at the lake also needed some work due to erosion along the shore and a break-wall was constructed there in the spring of 1975.

In 1925 Rainham had a membership of 24 which grew to 51 in 1985. In 1989, about 30 members who were seeking a more charismatic worship style left Rainham to form the Living Word Christian Fellowship. This group dissolved by 1992. The Rainham congregation has never been large.

Like other congregations Rainham has offered a variety of programs to its members and to its neighbors. Rainham was one of the locations where John S. Coffman held revival meetings in 1891 and 10 people were added to the membership. In 1925 when C. F. Derstine held meetings at the church, the school next door was cancelled for the afternoon so that the children could attend the meeting.

Sunday School was first organized in 1883 with Lydia Hoover as the first superintendent. Summer Bible School was also a regular program for many years, beginning in 1936. The women's sewing circle, first organized in 1918, has supported the mission of the church through the years. Rainham has also participated in sponsoring refugees, not only Mennonites from Russia in 1924-26, but also refugees from southeast Asia in 1980.

Klassen, Maria. "Two centuries of worship, a century of service: Rainham Mennonite Church continues to meet in God's names despite dwindling numbers." Canadian Mennonite 23, no. 10 (13 May 2019): 13.

Rainham Mennonite Church (Mennonite Church), once known as "Stoney Creek" and also as "Lake Shore," a member of the Ontario Conference and located in Rainham Township, Haldimand County, Ontario, was founded by Jacob Hoover (d. 1810), of York County, Pennsylvania, who settled here in 1790 with his family of five sons and three daughters. Among the early names were Strickler, Shank (a preacher here in 1816), Swartz, Byers, and Miller. Trouble apparently arose early in its history because of the westward movement in Ontario, for the Wayland List of Ministers and Deacons of the Mennonite Church in Canada (1853) names those of Cayuga Township but omits the neighboring Rainham group entirely. The Mennonite ministers of the Rainham congregation were probably out of fellowship with the Conference (MC) at that time. The center of the schism was at the Twenty (Vineland), the home of the leader, Daniel Hoch, only 50 miles from Rainham. The profusion of cemeteries is also indicative of division. There are two small burial grounds south of Selkirk; there are also plots in Walpole to the west, Fisherville to the north, Sweet's Corners to the east, and the principal one at Hoover's Point (Lakeside) on the lake. There was also a settlement of Mennonites from the Strickler church of Clarence, New York, who came to Selkirk after the middle of the 19th century. In 1956 the membership of the Rainham congregation was 39, with A. Lewis Fretz as minister and bishop, who also serves the South Cayuga congregation. (See also Strickler Mennonite Church and Miller Mennonite Church.)

When the first meetinghouse was built is not known, possibly in 1836, when the first deed was granted for church purposes, although the oldest marker in the cemetery is for a death occurring in 1812. The present meetinghouse, located 2 1/2 miles east of Selkirk and one mile north of the Lake Erie shore, was erected about 1870. The only other Mennonite congregation near by is South Cayuga, with a meetinghouse nine miles east. The two congregations have been served by one pastor since 1887.