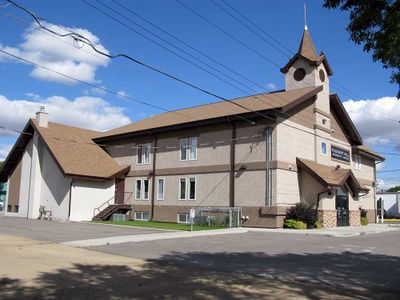 Pleasant Hill Mennonite Church, originally known as Pleasant Hill Mennonite Mission, had its beginning in 1928 through outreach in the Pleasant Hill district of Saskatoon. Benno Toews is considered the founding leader of the congregation. Toews, a university student, began Sunday school classes for children at the Anglican Church hall on Avenue T South and 19th Street. Most of the students came from homes that did not have a Christian background.

For a period of time, J. J. Thiessen, initially stationed in Saskatoon by the Home Mission Board of the General Conference, held evening Bible studies in private homes to help those whom he had contacted in his house calls in that community and to draw the families together. Eventually, these Bible studies were replaced by a worship service in the Hall on Sunday afternoon, preceding the Sunday school classes. For 15 years he went every Sunday to conduct this service. Thiessen was an instrumental part of the leadership of Pleasant Hill from 1930 until its official beginning in 1958, and continued his involvement for many years afterward.

For 25 years the Sunday school met at the Anglican Hall. In 1952 an unused recreation hall was purchased and relocated to 2133 22nd Street West, where it was converted into a chapel. The lot on 22nd Street was donated by Bill and Barbara Bergen. On 18 January 1953 the Pleasant Hill Mission Chapel was dedicated. Worship services were held Saturday evening, with the Sunday school classes continuing on Sunday afternoon. Christian Endeavour (young adults), choir and Bible Study were added to the schedule. In 1954, the women organized the Dorcas Mission Circle and began to financially support the work of the Mission. Until this time, the electricity for the lights in the Chapel was fed by an extension cord from Bill and Barbara Bergen’s house next door. Heat came from a wood and coal stove. In 1953, gas heating was installed. Isaak Ens served as leader of the congregation from 1953 until 1954.

In 1955 the group began to organize as a church. For a year, 1955-1956, Otto Driedger, a social worker, took the leadership. The Pleasant Hill Mission held their first annual business meeting on 3 February 1958. Peter Reimer accepted the position as leader, and G. Klassen, William Bergen and Abe Friesen were elected as trustees. Local ministers served with messages.

On 20 April 1958, the Pleasant Hill Mennonite Church was organized as an independent congregation with 21 charter members. In July, Reimer handed in his resignation and terminated his services at the end of the month. He passed away in November of the same year. The congregation then called Ben Fast, a teacher, to be their minister. The work blossomed under his leadership and a larger building became a necessity.

The property on 22nd Street was sold, and a new building erected at 111 Witney Avenue North and dedicated on 8 July 1962.

In the fall of 1966, Fast resigned his position and Carl Ens, a guidance counselor, took leadership on an interim basis serving as pastor until June of 1969. Dave Letkeman, then a college student, accepted the call and served as pastor from 1 July 1969 until he left for overseas mission service in 1975. Peter E. Funk was formerly from Saskatchewan but was serving as a pastor in Kansas, USA. Peter accepted the invitation to become the pastor beginning on 15 November 1975.

In 1995, the Sunday school, Pioneer Clubs, and Bible Studies were amalgamated into a one evening program called Family Night. The Sunday Morning Worship Service was scheduled for an earlier time and included Children's Church.

After a three-year period of discussion and discernment the congregation met on 11 October 2000 to vote on affiliation with the various levels of the General Conference of Mennonites. With a near unanimous vote PHMC became an independent Mennonite church.

The original heartbeat for missions has left a lasting impact on the church. On 17 November 2001 Pastor Eduardo Guinez began a Spanish ministry on Saturday evenings: "Iglesia Evangelica Mennonita Renacer."

Further growth necessitated another expansion of church facilities. A ground-breaking ceremony was held on Easter Sunday, 11 April 2004. Construction was completed in October 2004 and dedicated with a special service on 31 October 2004. Several adjacent properties were purchased in subsequent years in order to expand the parking lot. Further renovations took place in 2007. In the summer of 2007 another extensive project was undertaken to renovate the kitchen and bring it up to health standards.

In more recent years Pleasant Hill Church has been able to participate with the Calgary Vietnamese Mennonite Church in planting a Vietnamese congregation in Saskatoon.