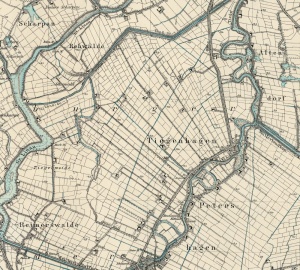 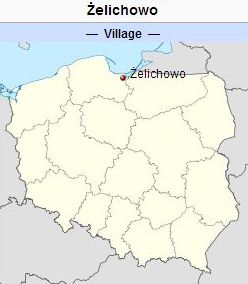 Petershagen was established in 1328. Until 1772 Petershagen was located in what was known as Royal Prussia (also known as Polish Prussia) in the Kingdom of Poland. The First Partition of Poland in 1772 resulted in the creation of a new province in 1773, called West Prussia, in which Petershagen was located. Petershagen was situated in the district (Kreis) of Marienburg until the establishment of the Free City of Danzig in 1920. The village came under the control of Nazi Germany during World War II until February 1945, when it was occupied by Soviet forces and returned to Poland. In 2012 Petershagen (now Żelichowo) was a village in the administrative district of Gmina Nowy Dwór Gdański, within Nowy Dwór Gdański County, Pomeranian Voivodeship

Petershagen was a part of the Tiegenhagen congregation. There the Mennonites of the Gross-Werder were in 1768 required to build a Catholic chapel on the Moskenberg and maintain it for all time in return for the permission granted by the Bishop of Culm (who in the name of the king of Poland exercised ecclesiastical sovereignty) for the erection of their own chapels in Tiegenhagen, Ladekopp, Fürstenwerder, and Heubuden. The newly built Catholic chapel was burned down by lightning in 1788 and was not rebuilt. The obligation was then met with a gift of money.