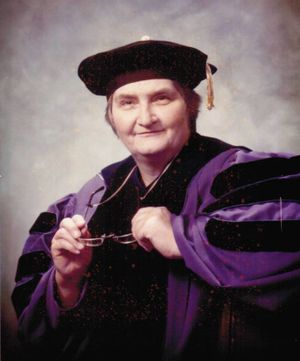 In 1944 the Peters family moved from Blumenort to Abbotsford, BC. There she took her high school at the Mennonite Educational Institute, graduating in 1951. She then completed her nurse's training at Vancouver General Hospital. After a few years working with the Victorian Order of Nursing in Trail, British Columbia and the surrounding region, she enrolled at the University of British Columbia where she completed the Bachelor of Science in Nursing program in 1960. Always a keen student and committed to gain as much education as possible, Kay then earned a Master of Religious Education at New York Biblical Seminary in 1962. In 1963 she studied French and tropical medicine in Antwerp, Belgium, in anticipation of missionary work on that continent. Following some years of missionary service in what was then the Belgian Congo, she earned a Master of Arts in Counselling at the University of Oregon, Eugene, in 1971.

Following additional years of Christian service, Kay Peters earned a Ph. D. in Religious Studies at New York University in 1980. Her dissertation topic was, "An Investigation into the Role of Religious Experiences and Commitment as a Therapeutic Factor in the Treatment and Rehabilitation of Selected Drug Addicts." In her doctoral work, as in her other studies, Kay integrated her strong interest in science, her commitment to health service, her extensive Biblical studies, and her over-arching desire to help others, particularly those in greatest need. Although Kay also studied at Mennonite Brethren Bible College in Winnipeg and the Mennonite Brethren Biblical Seminary in Fresno, California, she did not complete degrees in these schools.

In her varied studies which earned her four degrees in addition to the RN designation, Kay Peters was certainly a pioneer among Mennonite Brethren women. For many younger women she served as a model of what could be done. Dr. Kay Peters was one of the first Mennonite Brethren women to earn a Ph. D. while also having achieving success as a nurse, as an instructor in tropical medicine, as an effective African missionary, as a sought-after student counsellor and dean, as a Biblical scholar, and as a leader in both community and academic situations.

Katie Peters' ministry took her to many places of service. In addition to her work as a community nurse in British Columbia, she served as Student Counsellor at Lane Community College in Eugene, Oregon; as nurse and nursing instructor under the Mennonite Brethren Mission in the Congo; as Dean of Women and nurse-counsellor at Bethany Bible Institute in Hepburn, Saskatchewan; as campus nurse and counsellor at Wilfrid Laurier University in Waterloo, Ontario; as staff psychologist at the Matsqui Psychiatric Centre in Matsqui, British Columbia; and as a staff psychologist for the Fraser Health Unit in British Columbia, her last position of full employment.

Dr. Peters enjoyed church involvement, theological conferences, and general church conventions. She was always an eager participant. Significantly, she was a delegate to four Mennonite World Conferences: in France, Winnipeg, India, and Africa. At the time of her sudden death she was involved in two church home Bible study groups. A church member throughout her adult life, she spent her last years as a member of Bakerview Mennonite Brethren Church in Abbotsford, British Columbia.

Following Dr. Peters' death her siblings wrote some observations about her which included the following description: "She enjoyed reading, conversation, music and table games. She supported many causes, especially those tied to education. She was independent, determined, had a strong will to succeed and desired to serve the Lord."