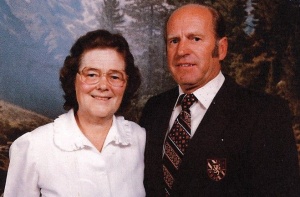 Frank’s father, Peter, became an ordained minister in 1930. Seven years later, Peter was taken from his family by the Communist regime. Frank and his mother and other family members were evacuated to Poland in 1943 during World War II with the retreating German army. Here, at the age of 15, Frank was forced to join the Hitler Youth, and sent to the eastern front to dig trenches. One day he was notified that all those born in Russia were to go to Czechoslovakia to be enlisted into the German army. Owing to an illness just prior to the scheduled departure time, Frank’s group left without him. Then before the arrival of the Russian army in 1945, Frank was permitted to go home. It was not lost on him that God had used an illness to spare his life, and that together with his mother, grandmother, and sister with her children, the family was able to flee Communism to find safety in western Germany.

Frank immigrated to Canada in 1948, settling in Coaldale, Alberta. Being a gifted student, he was at able to resume studies at the Coaldale Bible School. During this time he made a commitment to be a disciple of Jesus Christ after reflecting on Isaiah 1:18, and was baptized on 17 July 1949 in Grassy Lake, Alberta.

While Frank was working at the Experimental Station in Lethbridge, Alberta, his department head asked him to enter civil service, noting the security of such a position. After praying about it, Frank concluded that, instead of accepting the tempting financial offer, he was to apply for studies at the Mennonite Brethren Bible College in Winnipeg.

Following graduation with a Th.B. degree, Frank and Helen were called to serve in Winnipegosis under the auspices of Manitoba Mennonite Brethren Home Mission’s. After two and a half years, they moved to South America to work with the Board of Welfare in assisting German-speaking Mennonite Brethren (MB) churches in Uruguay and Brazil. When the South American MB Conference opened a Bible school, Frank was called to a teaching ministry that spanned five years. When two existing Bible schools in Curitiba were joined into a Portuguese speaking Bible school and seminary, called Instituto e Seminário Bíblico Irmãos Menonitas (ISBIM), Frank taught at this school.

In all, Frank served over thirty years in Brazil, with a two-fold ministry of teaching at ISBIM and reaching out to Brazilians through evangelistic campaigns, casual sports ministry, and family camps.

During a study leave in Fresno, California, Frank completed an MA degree in history.

Upon retiring from missionary service in Brazil, Frank was called to be the senior pastor of the King Road MB Church in Abbotsford, Canada. After the three years at King Road Church, Frank was invited to participate in the Logos Canada ministry.

In 2001, Culloden MB Church in Vancouver asked Frank to be the part-time associate pastor, serving German-speaking people in the congregation. While at Culloden, Peters was eventually diagnosed with cancer, and passed away in 2007.

Frank Peters found joy in studying and teaching the Word of God in various contexts throughout North and South America. Through Frank’s ministry many people became followers of Jesus Christ.