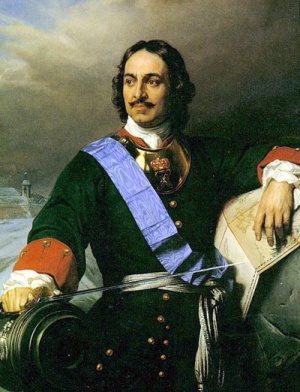 Peter spent some time in the Netherlands in 1697-98 and returned for a visit in 1717. He had learned to know Dutch business people in Russia and through these contacts he came to the Netherlands. During his stay in Holland he spent about a week in Zaandam to learn shipbuilding. After this he went to Amsterdam to study the same trade on the docks of the East India Company. Naturally his interest went far beyond the shipbuilding industry.

During his stay in the Netherlands Peter must also have established contacts with the Mennonites. Boris Rapchinsky reports that Peter invited among others the Mennonites Jan and Nicolaas van der Heyden, the inventors of fire engines, to come to Russia; they declined (Rapchinsky, 126). Nicolaas Bidloo, a Mennonite physician of Amsterdam, accepted such an invitation and became Peter's personal physician and the founder and professor of the first medical school in Moscow.

During his second visit at Zaandam in 1717 Peter is supposed to have been the guest of Claas Nomen (Noomen), a Mennonite preacher. When Peter expressed his interest in attending a Mennonite worship service, Nomen took him to church and presented to him "the essence of all admonitions" in the words, "think well, speak well, do well" (Denkt wel, spreekt wel, doet wel). Impressed by this pointed admonition Peter is said to have turned to his Russian priest with the admonition to do likewise. There are, however, a vast number of stories in circulation about Peter the Great's stay and experience in the Netherlands; therefore it may be hard to ascertain whether this incident actually took place. Zaandam has made a monument of the little house in which Peter spent about a week. Of his much longer stay in Amsterdam there seem to be few traces of this nature.