In 1934 while driving a feed truck through the Perkiomenville area in Montgomery County, Pennsylvania, Clayton Godshall sensed that this area needed the gospel. Clayton invited Abram Metz and Isaac Alderfer to go with him to visit local homes, hoping to start a Sunday school. An afternoon Sunday school began in a nine-room farm house on 2 June 1935, and the property was later purchased for $1,500. "Workers" were recruited from local Mennonite congregations.

In October 1938 the Sunday school began meeting in the morning. The Way, a monthly pamphlet, was distributed door to door, and later by mail, from 1942 to 1975. By 1944 the congregation sought a pastor and set an ordination service for 25 July. Abram G. Metz was called by lot from among three other men and ordained to the ministry. By 1947 the mission became a church and recorded a charter membership of 42 persons. In 1947, Isaiah Alderfer was ordained as deacon without use of the lot, due to a unanimous vote.

An early annual highlight was the week-long evangelistic meetings held from 1937 until 1967. They occurred less often after that date. Daily visitation and strong preaching called many to respond to the Gospel, but many young persons joined their parents’ churches instead of Perkiomenville Mennonite. In addition weekend Bible Instruction Meetings and midweek Winter Bible Studies were held each year to instruct members and converts in the faith. An important outreach was Summer Bible School, bringing in up to 148 children in 1950. Prayer meetings, teachers’ meetings and "cottage" meetings served as training times and programs to grow the church. 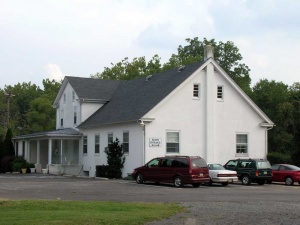 The farmhouse/church in 2007.
Photo by Richard A. Moyer. 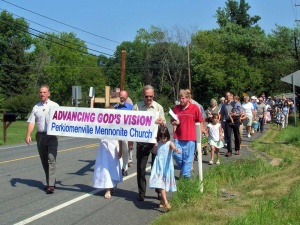 The congregation walking from the former building to the new Christian Life Center in August 2007.
Photo by Richard A. Moyer. 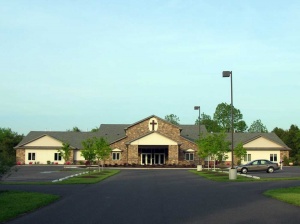 The new Christian Life Centre in 2009.
Photo by Richard A. Moyer.

By the late 1940s, the auditorium in the converted farmhouse at Perkiomenville became crowded, so members looked for a new mission location. In the nearby village of Frederick a 19th century Mennonite meetinghouse called "Bertolet’s" stood vacant. Perkiomenville congregation, with the support of the Franconia Mennonite Board of Missions, requested use of the building. The Bertolet Family Association agreed to permit song services in the building, and soon also allowed Sunday school. For a period of time, Abram Metz preached on alternate Sundays at Perkiomenville and Bertolet’s. Four families were sent from Perkiomenville to help with the new mission, and it soon developed into the Frederick Mennonite Church.

Some rowdy young men nicknamed "Franconia Cowboys," who were converted at the Brunk Brothers Revival meetings, met for prayer meetings at the church from 1951-1953 under the leadership of Sunday school Superintendent Robert Alderfer, with Bible study led by Floyd Hackman.

In 1957 the church planned a two-story addition to the farmhouse-turned-church at Perkiomenville, with a new auditorium on the first floor, and rest rooms, classrooms and sewing room/fellowship hall in the basement. They dedicated the $20,669 addition on 19 January 1958. A library, pastor’s study, rest rooms and classroom were added in 1991.

Beginning 25 March 1962 preaching services were held every Sunday morning at Perkiomenville. Abram Metz sought assistance for ministry in 1963. Stanley G. Godshall received a unanimous vote from the congregation, so once again use of the lot was unnecessary. Stanley was ordained 7 June 1964. When deacon Isaiah L. Alderfer was ordained a bishop on 13 October 1968, he joined the pastoral team and shared preaching responsibilities.

In 1974 an Advisory Board composed of three lay persons and the three ministers was created to assist in pastoral leadership. In 1978, due to Isaiah Alderfer’s ill health, an additional pastor was desired. Richard A. Moyer, a son of the congregation, was completing studies at Eastern Mennonite Seminary. Richard was called by ballot to serve, was installed in August 1979 and was ordained in January 1981 by Bishop Curtis Bergey.

The congregation processed the issues of divorce, remarriage and church membership, and of "close" (members only) communion. For several years, in cooperation with Frederick Church, the Community Courier outreach newspaper was mailed to the community. Irene Alderfer wrote that in 1981 "our worship services presently are being attended by a considerable number of people of non-Mennonite origin who live in the community."

In the early 1990s the LIFE Program (Living in Faithful Evangelism) was helpful for stimulating church growth. LIFE promoted outreach into the community and acceptance of people who were different from traditional members.

A shift in worship style from four-part a cappella singing to more contemporary worship music led by a team with instruments helped attract younger families into the the church.

After years of planning, in October 2006 ground was broken for a new “Christian Life Center” not far from the historic mission building, but on a state highway. Volunteers did many tasks and the new, one-story building was completed. After a brief service at the old meetinghouse, the congregation marched to the new building for the first service in August 2007.

Perkiomenville Mennonite Church (Mennonite Churc), located at Perkiomenville, Pennsylvania, was started as a mission station in 1935, by Clayton Godshall, and was organized as a congregation in 1947, with a membership of 47. Abram Metz was ordained minister in 1944, and Isaiah Alderfer as deacon in 1947. The congregation worships in a remodeled dwelling house. In 1950 a mission outpost was started by workers from the Perkiomenville congregation in an unused Mennonite meetinghouse, known as Bertolet's. It is located about four miles west of Perkiomenville. The membership at Perkiomenville in 1956 was 59, with Abram G. Metz as minister. In the spring of 1954 another mission was begun, also in an unused building, called Hersteins, which in 1956 had 23 members. A few of the members of Perkiomenville are workers there. In July 1957 a building program was started to provide more auditorium space and room for more Sunday-schoolclasses. Dedication services were held on 19 January 1958.