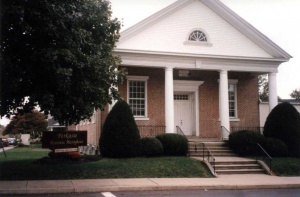 In January 1909 William M. Moyer, a member of Blooming Glen Mennonite Church, began organizing support for a new meetinghouse and Sunday school program in nearby Perkasie, Bucks County, Pennsylvania. In dramatic fashion a lot was purchased at the corner of Fourth and Chestnut Streets, and by 8 August 1909 a stately Neo-Federalist building was completed and the first meeting was held. Though not an official effort by Franconia Mennonite Conference, Perkasie was the first mission outpost established by persons who were part of that body.

From 1909 to 1948 Perkasie Mennonite functioned as a daughter organization of Blooming Glen Mennonite Church. Its primary focus was the afternoon Sunday school that had an average attendance of 130 during its early years. Preaching was held on Sunday evenings once a month. In 1914 it became the first congregation in the Franconia Conference to hold Sunday evening Young People’s Bible Meetings. This feature had wide support from youth and adults in surrounding churches. So many attended that the program was given twice in the same evening and an extra trolley car was necessary for the occasion. These meetings became a training ground, providing opportunities for leading singing, moderating the meeting, and giving talks. Small music groups that were banned in other congregations were an integral part of the evening programs. An important feature of these events was the initiative taken by lay persons. Offerings taken provided support for missionary George Lapp in India and the Aaron King family in Cuba as well as other relief projects.

In early 1948 Franconia Conference gave approval for Perkasie Mennonite to function as an autonomous congregation. Richard C. Detweiler of Souderton, who was attending Eastern Mennonite College, was ordained for pastoral leadership. In August of the same year the congregation held its first annual Summer Bible School with an enrollment of 125.

During the 1960s, 1970s and 1980s, Perkasie Mennonite experienced its greatest numerical growth. With a motto, "Every Member a Minister," there was a high level of lay participation in discerning and leading the congregational program of worship, spiritual growth and community witness. In 1956 an adjacent factory building was purchased and eventually renovated to provide a library, kitchen, fellowship hall, pastor’s office, and Sunday school classrooms. During this time a constitution and membership covenant were adopted, an annual congregational retreat initiated, a newsletter called The Stepping Stones published, and the use of nominations and balloting for filling leadership roles was replaced by a procedure of discernment by consensus.

In September 1987, after considerable deliberation, Perkasie Mennonite committed itself to using the gifts of all members without consideration of gender, and installed Barbara Esch Shisler as assistant pastor. This marked the beginning of a twenty-year period of leadership by pastoral team. During this time, in an attempt to be "people of invitation," the concept of outreach was expanded and given high priority. Instead of a focus on "getting people to come to church," efforts were made to build relationships with people in the community. Among other missional efforts, Perkasie Mennonite initiated and hosted a local chapter of the ecumenical Faith and Light program for the intellectually disadvantaged and their friends and families.

From 2006 through 2008 Perkasie Mennonite experienced a time of transition under the intentional interim ministry of J. Mark and Emma Frederick. This time of introspection, confession, and resolution culminated in organizational restructuring, the adoption of a "Behavioral Covenant," revised "Core Values," and the simple mission statement "To Model Jesus."