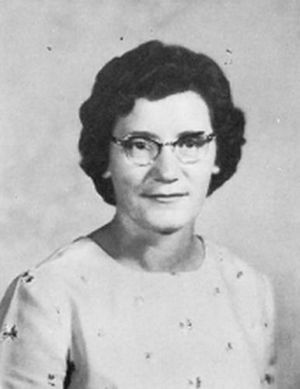 For the first two years of her life, Katy lived with her parents and siblings in the Borozenko Mennonite Settlement of South Russia. The family immigrated to Canada on 9 July 1926, arriving in Quebec City before settling on a farm near Swift Current, Saskatchewan. After the family moved to the town of Rosenhof, Katy began to attend a school nearby. When she and her family moved to Rosenbach, she transferred to a school in that town and continued on to complete Grade 8 there.

Katy Penner became a Christian at the age of five and was baptized at the church in Rhinefeld, where her father was the pastor, on 28 July 1940. Following her basic schooling, she went to the Herbert Bible School for two years and then enrolled in a dressmaking course.

One day, Katy heard missionary Henry Bartsch talking about work in the Congo, and she began to consider going to serve in Africa. Katy realized that she would need to complete her education in order to work as a missionary, and she went on to complete her high school studies before moving to Winnipeg, Manitoba, to obtain a nursing diploma from Grace Hospital and a Bachelor of Religious Education degree from Mennonite Brethren Bible College.

In spring 1952, Mennonite Brethren Missions/Services International (now Mennonite Brethren Mission) accepted Penner to work as a nurse in the Belgian Congo (now the Democratic Republic of the Congo). She left in August for further studies in Belgium before sailing a year later for Africa, where she arrived in the village of Matadi before continuing on to do an internship in Leopoldville (now Kinshasa). Four months later, she moved to Kajiji to do medical work at the mission hospital. During her time there, she helped the staff to deal with crises including a smallpox epidemic, as well as day-to-day patient care.

Altogether, Penner spent 28 years in the Congo. Much of her work was in the field of nursing, but she also spent some time helping with a silkworm project, as well as establishing a training school for nurses and later a second program to train auxiliary nurses. During the revolution of the 1960s, she was evacuated to Angola and returned to Canada for a time, where she worked at a doctor’s office. However, she soon returned to the Congo (then called Zaire) to work. She served as a nurse in Kinshasa and also became the director of an 1800-bed government hospital.

Between 1953 and her retirement in 1989, Katy Penner fulfilled many roles both in Africa and in Canada. At one point, she took time out from her service to care for her ailing mother and sister in Canada, and she was always active in the church, wherever she went. Katy died on 5 March 2008 in Kelowna, British Columbia.

Katharina "Katy" Penner was a dedicated medical mission worker whose work in Canada and Africa helped to improve the lives of many of the people she encountered. Throughout her life, she was an example of commitment, both personally and professionally.