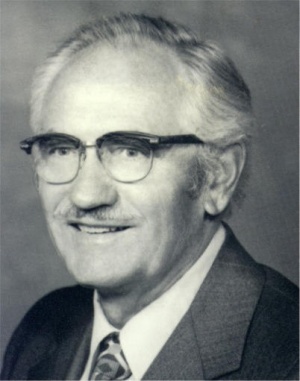 Cornelius Penner was born on 13 October 1911 in Tiege, Zagradowka, Ukraine, the eldest son of Heinrich Kornelius Penner and Katharina Martens. He immigrated to Canada in August 1924, with his parents and siblings, settling in Blumenort, SK. On 1 August 1929 he was baptized by his great-uncle, Franz Martens, into the Blumenort Mennonite Brethren Church.

Penner's education included a year at Herbert Bible School, a year at Saskatoon Normal School, as well as continuing university courses through evening classes, correspondence courses and summer schools from the University of Saskatchewan. On 14 August 1938 he married Luise Wiens, another school teacher, in Saskatoon, SK. During the 60 years of their marriage, they raised their eight children and enjoyed thirteen grandchildren.

After eight years of teaching in one-room prairie schools and five years with the Civil Service in Regina, Cornelius H. Penner began his life's work in the berry and frozen foods industry in BC IN 1946. His thirty years in the processing industry included Yarrow Growers Co-operative Union in Yarrow, Clearbrook Frozen Foods in Clearbrook, BC , and York Farms in Sardis, BC. He was a member of the Western Food Processors Association for twenty-five years, serving as its president for two. Upon mandatory retirement at age 65, he became the manager for the BC Raspberry Growers Association, shepherding the industry into a new era of marketing and lobbying for market share. Upon his second "retirement" ten years later, Cornelius continued to contribute his lifetime of expertise by volunteering with the Canadian Executive Services Organization. He and Luise made four trips to Peru and Bolivia, South America initiating new processing facilities, training staff and preparing feasibility studies for producers there. He finally retired at age 79.

Cornelius H. Penner was also always keen to serve his community. He served on the Yarrow Water Board for twenty-one years and the Chilliwack Hospital Board for ten years. In August of 1988 he was awarded the honour of "Freeman of Matsqui" for his contributions to that community.

Cornelius Penner taught Adult Sunday School for thirty-four years at Grace Evangelical Mennonite Brethren Church (now Grace Evangelical Bible Church) in Abbotsford, BC. He also served as church moderator, treasurer and auditor at various times during those years. He represented the church on the MCC executive for six years. He also served on the executive of the Evangelical Mennonite Brethren conference (now Fellowship of Evangelical Bible Churches) (FEBritish Columbia, Canada) for eighteen years (1956-1968, 1975-1982) and on the Canadian Board of Directors for the same conference (FEBritish Columbia, Canada) from 1972-1982.

Cornelius Penner died 7 February 2000, fifteen months after the death of his wife, in Abbotsford, BC.

Penner, Cornelius H. "The Story of My Life." Unpublished. Copy deposited in the Mennonite Heritage Centre in Winnipeg, MB.