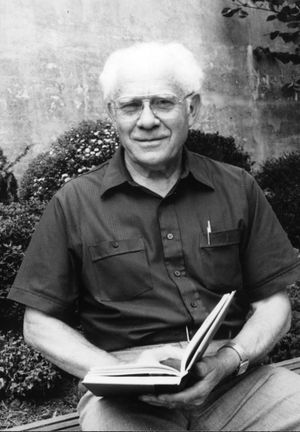 LeRoy Pellman was a teacher, postmaster and farmer who encouraged education. Within this context, Hubert Pellman was valedictorian of his Freeburg High School graduating class in 1936. He went on to earn a junior college diploma (Eastern Mennonite School, 1938), an AB in history (Susquehanna University, 1940), an MA in English (Bucknell University, 1940), and a PhD in English (University of Pennsylvania, 1958). His dissertation on the Puritan founder of Connecticut was titled, “Thomas Hooker: a study in Puritan ideals.”

John L. Stauffer encouraged Hubert Pellman to teach at Eastern Mennonite School (EMS), which he did in 1941, both at the high school and college level. During World War II, he had a farm deferment, during which he worked on his father-in-law’s farm and began work on his PhD. He returned to teaching in 1947, and continued until retirement in January 1984.

Hubert Pellman was ordained as a Mennonite minister on 8 November 1953 for service in a new rural mission near Port Republic, Virginia that came to be known as the Mount Vernon Mennonite Church. He served as its minister for 17 years.

In his obituary Hubert Pellman was recalled as a person who could confer with fellow academics at a professional meeting, or visit on the porch of a one room cabin in the mountains with equal interest in and respect for his conversation partner. It was said “He devoted his life to his family, to his teaching, and to service in the Mennonite church.”