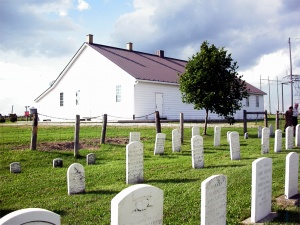 The Peel Old Order Mennonite congregation has its meetinghouse in Mapleton Township, Wellington County, on the north side of Line 86 at 6363 Sloman Road.

In 1901 Joshua Bowman sold 1.5 acres of land to the deacons of the Old Order Mennonite Church. The same year a white frame meetinghouse was erected on the present site and an adjoining cemetery enclosed. The choice of the site created a furor as some members felt the house would never be filled because only two families lived so far west at the time. (In 2004 the Old Order Mennonite community extends farther west than east of the South Peel meetinghouse, and four meetinghouses have been built farther west of this meetinghouse.)

David B. Martin, who had been ordained as a minister for the West Woolwich (Elmira), transferred to Peel as its first minister. John Nahrgang served as the first deacon.

At the end of the 18th and in the early 19th century some Mennonites migrated from Pennsylvania to Ontario. In the latter part of the 19th century the Mennonite Church in Ontario experienced a spiritual revival. Evening revival meetings, English preaching, and Sunday schools were new methods adopted at that time. Some of the more conservative members observed a shift in emphasis from humility, submissiveness and Jesus' meek and lowly spirit to a more aggressive approach. Their concern about this shift in spiritual emphasis led them to leave the Mennonite Conference of Ontario and to form the Old Order Mennonite Church. The Peel congregation is part of this group.

Old Order Mennonite ministers are ordained from the congregation by lot. No seminary training is taken, and the ministry is not paid for their church service. Ministry associated with Peel are listed in the accompanying table.

In 1925 the Peel meetinghouse was enlarged by integrating the anteroom into the main auditorium and building a new anteroom. In 1946 it was enlarged again, this time by moving a gable end and adding to the middle. In 1996 the old meetinghouse was torn down and a new one erected when the old building required extensive repairs. It was also hoped the new building, located farther from the road and facing a different direction, would decrease noise problems from the busy road. The congregation planted a hedge of trees in order to deflect noise from the road. In 1998 additional land was purchased to enlarge both the parking space and the cemetery.

Ironically, although the Peel Mennonite meetinghouse does not use electricity, two separate transmission power lines cross the meetinghouse yard. In 1998 Ontario Hydro granted permission to the congregation to use part of the power utility's lands for parking. The congregation pays an annual fee for this privilege.

From 1963 to 1965 the Peel meetinghouse was shared with a Markham-Waterloo Mennonite Conference congregation, who used the meetinghouse only once every six or eight weeks..

In the annual Kalender für die Versammlungen der Mennoniten-Gemeinden in Ontario, the meetinghouse was identified as South Peel until 1992, after which it was referred to as Peel. In 1996 the Peel congregation was split into Peel West and Peel East districts, with the meetinghouse used almost every Sunday by alternating congregations. This was not a permanent division, and no new ministry was ordained. Rather, it provided a solution to a crowded church and complex visiting patterns. The East and West districts were still one congregation for purposes of counsel meeting and communion, and for financial purposes. In 2004 when about nine families at the west end of the community transferred to the Weaverland East congregation, Peel returned to worshipping as one congregation.

No accurate count of members is available for most of the history of Peel Mennonite Church because Old Order Mennonites think of themselves as members of the church at large not just the immediate congregation. The Old Order also do not see the quantity of members as indicative of the congregation's importance. When a person moves from one geographical area to another, he automatically "belongs to" the congregation whose meetinghouse is closest to his home. No membership transfer takes place from the former location.

*Unless otherwise noted, the dates of service span date of ordination to date of death.

1In 1917 both David B. Martin and David W. Martin left the Old Order Mennonite Church and were instrumental in starting the David Martin Church.

2Some records show his last name as "Bowman."