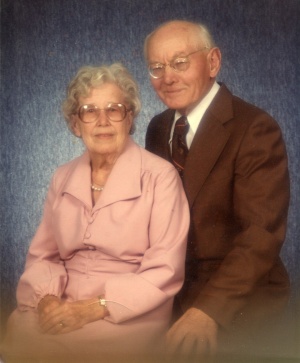 Henry B. Pauls: farmer and artist; born 28 September 1904 in Chortitza, Ukraine to Bernhard and Helena (Epp) Pauls. He was the second child in a family of two sons and four daughters. On 1 July 1937 he married Sara Hildebrand. They had four sons and two daughters. Henry died 5 May 1995 in Leamington, Ontario.

While growing up in Russia Henry pursued an education that qualified him to enter the teaching profession. Henry had an early interest in painting as he often talked about his teacher, Mr H. Dick who taught him the basics of painting and in 1915 left him with a watercolor painting of a scene in Russia. Henry cherished that painting and carried it with him through his many moves.

When the difficult times came, Henry, his parents and siblings were forced to pull up roots and move to Canada. Because of the new language and customs it was clear his ambition to be a teacher would have to be put on hold. Henry and Sara purchased property in the Sonningdale area of Saskatchewan, built a log home and gradually built up a mixed farming operation. In 1949 Henry and Sara decided to pull up stakes and move to Ontario primarily because they felt schooling opportunities would be better in Ontario.

Henry and Sara and their five children settled in the Leamington area of Ontario and developed a new farming operation based on production of cash crops like tomatoes, tobacco, strawberries and asparagus. Soon a sixth child was born. While operating the farm Henry's mind was often on Russian Mennonite history as demonstrated by his frequent correspondence with Dr. David Rempel, a cousin and professor in that field at the College of San Mateo in California.

In 1987 the Pauls retired from farming and rented the land to a neighbor and friend in the area. Soon after retiring from farming Henry felt a need to record as much information as he could about his childhood in Russia. He wrote short stories in longhand and provided copies to their children and grandchildren. The story telling soon developed into recording his ideas in oil paintings. Henry painted approximately 100 original paintings of his childhood in Russia, pioneering in Saskatchewan and farming in Leamington. Of these paintings approximately 26 paintings are in the National Archives, Ottawa, 25 paintings are in the Mennonite Heritage Center, Winnipeg, and 28 paintings are at Conrad Grebel University College, Waterloo. The rest of his paintings were given to family and friends. Henry never received money for his paintings, as he felt privileged to be able to make this small contribution to society. Many of his best stories and paintings were published in A Sunday Afternoon (1991).

Most of his paintings of historical significance were completed while living in the farmhouse in Blytheswood. In 1990 Henry and Sara moved to a Mennonite retirement community in Leamington where he lived out his remaining days in peace knowing that his heritage had been recorded for posterity.