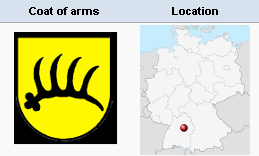 Oppelsbohm, a town formerly in the Winnenden district of Württemberg, and now in the Rems-Murr district of Baden-Württemberg Germany (coordinates: 48° 51′ 41″ N, 9° 28′ 10″ E). The magistrate at Backnang in 1562 presented to Christoph, Duke of Württemberg, a written report of the oral information he had received from the pastor of Oppelsbohm concerning the Anabaptist Lienhardt: Lienhardt had never come to church nor to communion, had stated that all church ordinances are of the devil, had been four or five years with the Anabaptists in Moravia, and had been in prison as a deceiver several times. His wife was a member of the church and had the children baptized. According to the "Anabaptist Calender" of 1570 the ducal chancellory had admonished Margarethe, the wife of the Anabaptist Feierabend of Oppelsbohm, who had left the country. Adam Epplin of the Oppelsbohm parish was to be locked up and admonished. His daughter had promised obedience before the pastor. Franz Feierabend, though banished from the country, let himself be seen in Oppelsbohm without fear, was therefore to be seized. Feierabend's wife would go to church but not to communion, felt unworthy because she could not keep the Ten Commandments, was to pay three shillings for every sermon she had missed, denied the presence of the body and blood of Christ in the communion emblems. In 1574 Hans Hieber charged his wife Maria with Anabaptism.

The pertinent dean had "refuted her." She would come to church and communion, and would then be watched. In 1575 Franz Feierabend's wife attended church because of the fine, but not to communion, was unteachable. In 1576 her exiled husband slipped into the village again, was seen by the pastor. In 1577 Leonhard Payer and Görg Feurlin had not communed for four years. The latter gave as his reason the hostility of one of the villagers. He was the chosen representative of the community, but was unable to forgive. Margarethe Feierabend had rudely declared to the dean that she would come to communion only under compulsion, "walked out of the room defiantly, said she wanted to be left alone." She also rejected infant baptism. The shoemaker Caspar Mack had not been to communion for three years and declared to the parson that on Sunday he had to deliver shoes and went to church elsewhere. In 1582 Hans Feierabend, Sylvester Siglin, Görg Feurlin, who had not taken communion for six years, offered as excuses their unworthiness, quarrels, and anger, promised to reform, were thereupon watched, and did better in 1583. In 1584 Bartle (Bartholomäus) Weiss had again communed after a lapse of thirty years and had recanted. Marginal note of the church inspector, "Deo Gratias!" In 1586 Margaretha, the wife of the Anabaptist Görg Kurtz, according to her own confession, rarely went to church, and had for ten years not gone to communion; the reason was her husband's exile. For she could not pardon those who had helped to drive away her husband. Besides, she knew of much frivolous living which was not punished, but her pious husband was nowhere tolerated; he was being treated unjustly. To the dean who had spoken to her the fourth time about baptism and communion she refused to answer. The inspector recommended diligent attendance at church and communion, or she would be sent after her husband! In 1587 she took communion.

In 1609 Philip Pfeil, who had gone to the Anabaptists for a year but had returned, could not be found. The dean ordered that he was to be sent to the office if he was seen. In 1611 Konrad Faut, the Swiss Anabaptist, kept all other commands and prohibitions, but neither went to the sermons nor to communion, led no one astray, but persisted in his opinion in spite of all instruction. The 70-year-old man was to be threatened with prison and if he died unrepentant he would be buried without a sermon or church bells. In 1614 Maria, Jakob Faut's wife, was under suspicion of being an Anabaptist, seldom went to church, had not taken communion for three years, had presumably been confused by her father, an Anabaptist. After admonition by the parson she declared that she would avoid sermon and communion. Thereupon she was summoned to the consistory in Stuttgart as a stiff-necked Anabaptist. She was ordered into a women's prison and was there asked pastoral questions. "She answered that she was not misled by any one, but had been instructed by her father. What he believed she believed too. Where her brethren met she did not know and would not betray any one. Judas' betrayal of Christ did him no good." She had five small children, had not been rebaptized, had also had her children baptized. She acknowledged that she was a great sinner. He who does the right is saved. Of a justifying faith she would know nothing. Obedience is due the government. Upon payment of the costs she was released and put in chains at home. Konrad Faut, still "obstinate" in 1615, offered a public recantation in 1617 and went to church and to communion. Maria was still obstinate in 1618, was to be brought to church by the beadle, and if she died impenitent, should be buried without song or bells.