From GAMEO
Revision as of 18:29, 31 January 2020 by AlfRedekopp (talk | contribs)
(diff) ← Older revision | Latest revision (diff) | Newer revision → (diff)
Jump to navigation Jump to search
A checked version of this page, approved on 31 January 2020, was based on this revision. 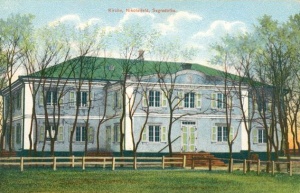 The Nikolaifeld Mennonite Church was located in the Zagradovka Mennonite Settlement, province of Kherson, South Russia. The Zagradovka settlement was established 1872-1879, comprising 17 villages. The settlers came from various places. In this heterogeneous mass there was not a single minister. The first election of ministers was held 22 October 1872. Three men were elected to preach; next year a few more were added. On 2 June 1874 the congregation was organized as the Tiege Mennonite Church, and Wilhelm Voth was elected and ordained elder of the congregation. Services at first were held in schools and large sheds, but in 1888 construction of a large church in the village of Nikolaifeld began. The first service in the new church was held 5 May 1891, after which the congregation was renamed the Nikolaifeld Mennonite Church.

Among the first ministers were capable men, some of whom had belonged to the Gnadenfeld "brother" circle; most of them had been affected by the wave of reformation that had swept through the Mennonite villages of Russia during the 1860s and which is to be identified with such names as Eduard Wüst and Bernhard Harder. The Nikolaifeld ministers preached the necessity of rebirth and sanctification of life; they did not read their sermons as was customary at that time but spoke extemporaneously. Bible conferences, prayer meetings, visitation of members in their homes, mission circles, etc., were introduced.

Martens was followed by Johann W. Voth, the son of the Elder Wilhelm Voth. Voth resigned in 1921. His successor, Franz Wiens, resigned and joined the Evangelical Church. Heinrich Voth, no relative of the above-named Voths, was then elected and ordained as elder; he was young, energetic, and capable. He was sent into exile in 1931 and the church building was converted into a granary by the Soviets. All ministers were either sent into exile or killed. Under ruthless Soviet pressure all organized religious life ceased to exist.

In 1922 the congregation had 1,241 members. In the course of time subsidiary congregations were established (1) near the station Zuvorovskaya in the Caucasus, (2), Pissarev, (3) Trubetzkoy, and (4) Durilino. Missionaries from the congregation in foreign fields were Johann Wiebe, German East Africa; Peter J. Wiens, Champa, India; Suse Richert, Java; Helena Goossen, Java.