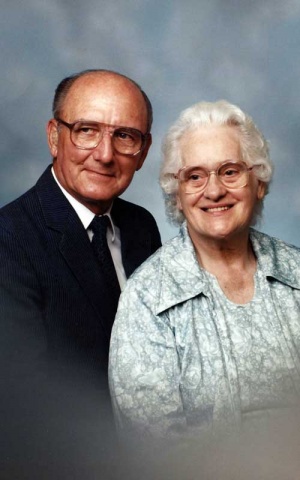 Ross Nigh lived at home until he married. He was baptized by Bishop Bert Sherk in September 1931 in Lake Erie, and became a member of the Bertie Brethren in Christ church. He attended Stevensville Continuation School (high school) and took a Bible course at Ontario Bible School in the Niagara area where he and Roxena Hahn met. War and conscription terminated his studies in 1941, when he was sent to an alternative service work camp at a former lumber camp at Montreal River, Ontario. With other conscientious objectors, he spent four months extending the Trans-Canada highway north. For Ross Nigh, this experience would be life changing.

Marrying after the war's end, Ross Nigh and Roxena Hahn purchased a neighboring farm where they remained until retirement, when they moved to Stevensville. They attended the congregation of Ross's youth, the Bertie Brethren in Christ Church, until Fallsview Brethren in Christ Church was organized in 1958. In 1950, Ross and Roxena had joined other young people from the Bertie congregation to begin a Sunday school in Niagara Falls. The stress of overwork in his role as unofficial pastor caused a deep depression which brought Ross Nigh a life long compassion for others who suffered.

Ross Nigh was ordained in 1958 as pastor at Fallsview, where he served until 1975 when he was called back to Bertie. On their retirement in 1984, he served several congregations as interim pastor before returning to Fallsview. With his warm personality and engaging preaching style, he was much appreciated for his work with youth; meanwhile, Roxena's friendly nature and warm hospitality touched many including visiting evangelists and missionaries.

During his years of ministry, Ross Nigh served in a variety of administrative roles. He chaired the Niagara Falls Ministerial Association for many years, and served his denomination as chair of the Canadian Brethren in Christ Missions Board. His heart for mission included strong pacifist convictions taught by E. J. Swalm. In 1963, Ross Nigh was named chair of Mennonite Central Committee (MCC) Ontario Peace and Social Concerns Committee. Through his chairmanship of MCC Ontario (1973-1983) and MCC Canada (1981-1987), and as vice-chairman of MCC International (1982-1987), he was able to influence the Brethren in Christ constituency, as well as the local Niagara community, on matters of peace and justice as the 1992 awarding of the Fort Erie YMCA Canada Peace Medal suggests. His passion for missions and peace work was fuelled by international travel to Cuba, India, Nepal, Pakistan, and Africa. Roxena Nigh supported this ministry with board work in the local Christian Benefit Shop. Meanwhile, on the home front, her cake decorating business grew into a chocolate-making business, Nigh's Sweet Shop.

Ross Nigh loved to tell stories. His recollection of meeting an Ethopian farmer ploughing a field with a team of oxen gives a snapshot of the man he was. As a boy he had worked land with a team of horses pulling a similar style of plough and when he asked if he could take over the plough, the Ethopian reluctantly agreed. Watching Ross Nigh behind the plough, the farmer acknowledged: "The old man is not doing too badly." Ross Nigh's enjoyment in rehearsing this story illustrates the compassionate heart that nurtured his lifelong interest in the welfare and mission of his denomination, and the deep desire to promote its peace witness.

Marr, Lucille. The transforming power of a century: Mennonite Central Committee and its Evolution in Ontario. Kitchener, Ontario: Pandora Press, 2003.

Wittlinger, Carlton. Quest for Piety and Obedience: The Story of the Brethren in Christ. Nappanee, Indiana: Evangel Press, 1978.