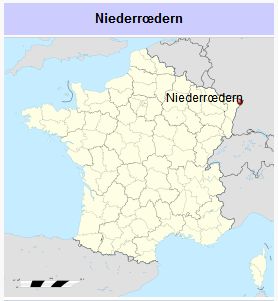 Niederrödern (Niederrœdern), a village in Alsace, seven miles (13 km) east of Wissembourg, was one of the oldest meeting places for the present Mennonite Deutschhof-Geisberg congregation. The castle there, belonging to the Deutschhof estate, was leased by Baron Hatzel to Christian Gingerich, a Mennonite, on 22 April 1711, according to the records in Strasbourg. The church records (1724) of Niederrödern show that the estate was "given in lease to the Anabaptists Jakob Bassler and Hans Krayenbühl [Krehbiel]." Another tradition says that Krehbiel occupied the farm in 1716, coming from the Pfrimmerhof near Sippersfeld in the Palatinate. In 1755 he took on his son-in-law Christian Lehmann (from the Geisberg or the Zweibrücken congregation) as a partner. He is the progenitor of the Lehmann family living on the Kaplaneihof and Deutschhof. After Hatzel's death (1762) the estate fell to the Elector Palatine and then to Prince Maximilian of the Palatinate and Zweibrücken, who later became the king of Bavaria. But in the course of the French Revolution it was confiscated and in 1794 sold to the two sons of Lehmann and the widow of Daniel Hirschler on very favorable terms. After these families died out, David Schmitt of the Deutschhof (1870) and then his nephew Friedrich Schmitt of the Haftelhof came into the possession of the castle estate.

The Mennonites who had settled in other places nearby met for worship in rotation at Schafbusch, Geisberg, and the Haftelhof, and for a long time in the Niederrödern castle. In 1875 a neat little meetinghouse was built, for which the community and the state put 2,000 franks at their disposal. It was dedicated on 6 June. In the following decades it was used less and less, and by 1942 was used only once a year.

In 1792 a register of births, marriages, and deaths was begun, apparently by order of the authorities, in duplicate. It extended only to 1798, however. The church record of the Deutschhof congregation, opened in 1855, and dated back as far as memory could recall contains data about the Mennonites in Niederrödern.