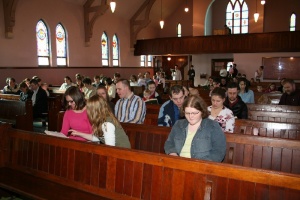 The first service in Tilbury, Ontario, was in a rented store that it outgrew quickly. Services began in German, but quickly shifted to English. In December 2000 the church moved to a larger rented store on Main Street, Tilbury.

In February 2007 the congregation began meeting in a church building (the former St. Charles Roman Catholic Church) it purchased in the smaller community of Stevenson, about 10 minutes from Tilbury. The congregation’s name was changed after the meeting place relocated outside of Tilbury.

On 8 July 2001 the congregation was received into EMC membership.

Pastoral couple Jacob and Anna Enns married in March 1987 in Mexico, left for Canada a few days later, and became involved in Mount Salem Evangelical Mennonite Church in Aylmer, Ontario. In November 1991 Jacob and Anna Enns moved to Leamington, Ontario, to help with the church plant of the Leamington Evangelical Mennonite Church. In 2000, Jacob Enns was asked to lead the church plant in Tilbury.

Jacob Enns resigned as pastor in 2011 and a pastoral search began. In 2012, New Life Christian Fellowship averaged 100 at a worship service.