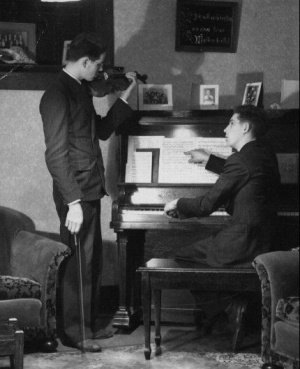 In the mid-1960s, Walter and Menno Neufeld, with their orchestra and choir, recorded an LP with evangelist and singer Hildor Janz. Walter travelled to Italy where he bought violins, and to Japan, where he visited the famous Suzuki violin school. By this time, however, the Mennonite community in Yarrow was declining, and the two Neufeld brothers moved to a small studio on Clearbrook Road across from what was then the Mennonite Educational Institute in Clearbrook (now Abbotsford), BC. The studio also served as a residence and as a rehearsal hall for the string orchestra; the ceiling of the rehearsal room was lined with egg cartons for better acoustics.