From GAMEO
Revision as of 03:29, 12 March 2015 by RichardThiessen (talk | contribs) (Rearranged article; added categories.)
(diff) ← Older revision | Latest revision (diff) | Newer revision → (diff)
Jump to navigation Jump to search
A checked version of this page, approved on 12 March 2015, was based on this revision. 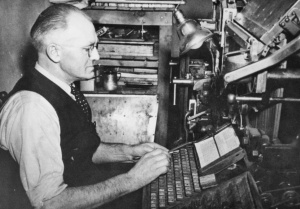 Kornelius attended elementary and secondary school in Nikolayevka, and subsequently completed a four-year program at the Kommerzschule (Commerce School) in Barvenkovo. In 1919, he was conscripted into the White Russian army where he served as a medic on the battlefield. He was shot in the thigh (the bullet was never removed), and spent several weeks in a Crimean hospital before returning to Nikolayevka. On 13 June 1920 Kornelius was married to Anna Neufeld by Rev. Hermann A. Neufeld, the bride’s father. That same year he became a teacher at Nikolayevka High School, the school he had previously attended as a pupil. The next year he taught at the local elementary school.

Although the rest of Anna’s family immigrated to Canada in 1923, Kornelius and Anna, his parents, his sister, and their two children (Susie and Kornelius) did not follow them until 1929, when the political situation made it almost too late. In 1923, Kornelius and Anna took over her parents’ house and farm, in Nikolayevka, with the intention of purchasing it over time. They farmed on the property until 1929, when they abandoned it. Shortly before they were allowed to leave the Soviet Union, Kornelius was detained for a number of days in a Moscow prison before being released. In the spring of 1930, they arrived in Winkler, Manitoba, where Anna’s parents now lived. Kornelius quickly found work as a farmhand in the area. Soon, he joined his brother-in-law at the Rundschau Publishing House in Winnipeg, Manitoba as a printer and linotype operator, and purchased a house in North Kildonan. Twelve years later, on 2 October 1942, Anna passed away suddenly of a heart condition.

One of Neufeld’s co-workers at the Rundschau was Jacob Regehr, whose younger sister, Kathryn, was teaching in a one-room school in Kansas, USA at the time. When visiting Jacob’s house, Neufeld noticed a picture of Kathryn on the dresser, and determined that she was the one he wanted to marry. After one meeting, followed by many letters back and forth, the couple felt they had gotten to know each other very well, and on 2 October 1943 they were married, in Winnipeg. The minister, again, was Neufeld’s father-in-law, Rev. Herman Neufeld. At the time, neither Kornelius nor Kathryn were baptized, and they now decided together to take this step. They were baptized in the lake at Bird’s Hill Park, Winnipeg in August 1944.

In 1945, Kornelius’ father died, and he, Kathryn, and their baby son Ernest traveled to Yarrow for the funeral. Yarrow appealed to them, so they bought a lot on Central Road, and decided to move. Neufeld resigned from the Mennonitische Rundschau, sold their house in North Kildonan, and with their combined assets, built a small printing shop and purchased some second-hand machinery. There was no money left to build a house, so the family lived for the first five years in a small “cabin-shack” on the lot. A two-acre raspberry farm was purchased with no money down (payments made from profits) to provide income while the fledgling printing business grew. This raspberry farm provided work for the three sons every spring and summer. Neufeld took great pride in the quality of his plants.

Although Yarrow was really too small to support a printing shop, most of Neufeld’s business came from outside the community – from individuals (e.g. wedding announcements), schools, churches, and businesses. In the 1940s he published Der Friedens-Bote, a community paper. Neufeld printed books for customers as far away as Ontario. At times, when there were urgent deadlines, the whole family was involved. Since Kornelius was meticulous in his writing, he was often elected as recording secretary for church committees.

Kornelius retired at the age of 75. He and Kathryn moved to Clearbrook in 1973 and joined the Clearbrook Mennonite Brethren Church. They felt very much at home in this church, as many members had already moved there from Yarrow; also, a number of the members were acquaintances from Russia, including some of Kornelius’ former students from Nikolayevka.

Neufeld, J. J. Coming Events in the Light of the Scripture. Yarrow, BC: Columbia Press, 1953.

Toews, C. P. A History of the Terek Settlement: Its Origin, Growth and Abandonment. Yarrow, BC: Columbia Press.

Willms, H. J. At the Gates of Moscow. Yarrow, BC: Columbia Press, Committee of Mennonite Refugees from the Soviet Union, 1964.