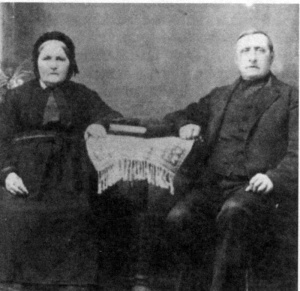 Justina Loewen Bergen Neufeld: pioneer doctor; born 1 March 1826 in Tiegenhagen, Molotschna Mennonite Settlement, Russia, to David (1796-1865) and Susanna (ca. 1804-1840) Loewen. She was the second of five children in the family but the oldest surviving child. Justina was baptized in 1845 in Margenau, Molotschna, and on 21 August 1845, she married Isaak Bergen (1820-1874). The couple had seven children: David, Maria (died young), Justina (died young), Susanna (died young), Isaac, Johann, and Jacob. On 13 November 1875, Justina married Gerhard Neufeld (1827-1916) in Fürstenau, Molotschna Colony. The couple had no children together, although Gerhard had six children from his previous marriage. The family immigrated to the United States on 2 July 1878, arriving in New York before moving west to Minnesota. Justina died on 11 January 1905 in Mountain Lake, Minnesota.

Justina Loewen Bergen grew up in a poor family in southern Russia. Her father’s work as a shoemaker was very badly paid, but his income increased substantially after he spent some time in Prussia getting medical training. Justina frequently accompanied her father on his house calls, and she was working as a midwife’s assistant by the time she was 15 years old. Her husband, Isaak Bergen was also a shoemaker, as her father had been, and  for years Isaak and Justina Bergen struggled to make a living. After Justina’s father died in 1865, however, Justina soon became one of the best-known doctors in the area. She traveled throughout the Molotschna Mennonite Settlement treating the sick; her fame also spread to other colonies and patients would travel long distances to ask for her help.

Justina Bergen’s medical career continued after her husband’s death in 1874. Although  reluctant to marry a second time, she did marry widower Gerhard Neufeld, a minister in Fürstenau, late in 1875.

In Minnesota Gerhard Neufeld became the first bishop of the Mennonite church and Justina continued her medical work. Besides her work in Mountain Lake, she also treated patients in Nebraska, Kansas, and Manitoba, making long trips by train to visit the sick. Over the course of her life, she helped deliver over 11,000 babies. She also helped to train three Manitoba women in midwifery. Eventually, however, health problems forced Justina to give up her active medical work. She died on 11 January 1905 in Mountain Lake.

Justina Bergen Neufeld was a dedicated doctor, committed to using her skills to help the people around her. She had an influence far beyond her hometown and left an example of reliability and skill for her descendants to follow.