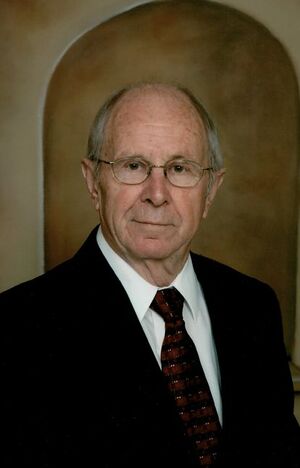 John’s early childhood was spent in the Headingley and Springstein areas of Manitoba. At the end of 1944 the Neufeld family moved to the Fraser Valley of British Columbia, first to Greendale and then to Aldergrove.

John was baptized on confession of his faith in 1952 and became a member of the Bethel Mennonite Church, Langley, BC. His education included graduation from Mennonite Educational Institute in 1953 and a B.Ch.Ed. from Canadian Mennonite Bible College in 1956. During his years at CMBC he met Anne Hiebert from Waldheim, Saskatchewan, and they married in 1955. He received an elementary teaching certificate from the College of Education at the University of British Columbia in 1957. His work experience in those years included a variety of summer jobs, including a two-man sawmill, in the peat bogs, at a fish cannery, and truck driving.

Neufeld was ordained to the Christian ministry in 1960 prior to going to South America for a term of service. He graduated with a B.A. from Western Washington State College in 1963. Further studies led to his receiving the M.Div. degree from Mennonite Biblical Seminary in 1966 and a D.Min from Bethany Theological Seminary in 1982.

John began his teaching career at an elementary school in Surrey, BC, where he taught for two years from 1957 to 1959. From 1959 to 1966 John taught at Bethel Bible Institute in Abbotsford, including a year as principal in 1963-64. During several summers he was director of the summer camping program at Camp Squeah near Hope, BC. Neufeld also taught at the Seminario Biblico Mennonita in Montevideo, Uruguay in 1960-61.

John served as pastor of First Mennonite Church in Winnipeg from 1969-1984 and as President and Associate Professor of Practical Theology at Canadian Mennonite Bible College (now Canadian Mennonite University) from 1984-1997. Neufeld was devoted to the inseparability of the church and the academy, a relationship that he considered essential to higher Christian education. Through his work serving in Mennonite settlements in Paraguay, Uruguay, and Brazil, as well as through his pastoring at First Mennonite Church in Winnipeg, Neufeld immersed himself in the many experiences and stories that shaped the ordinary people who make up the Church.

Neufeld contributed a number of radio meditations for the Faith and Life program and for the German program, Frohe Botschaft, annually for over 25 years. John was known as a story-teller and a gifted preacher. A collection of his sermons, The Story that Shapes Us, was published on the occasion of his retirement in 1997.

Towards the end of 1997 John was diagnosed with non-Hodgkin’s lymphoma and underwent a number of rounds of chemotherapy until December 2007. In 2015 John suffered two blackouts which resulted in his receiving a pace maker as well as beta blockers for his heart. He was told that his heart had suffered delayed damage from the chemotherapy he had received earlier. As a result of having to deal with serious health crises he was invited to speak on subjects relating to suffering and its relationship to the Christian faith.

Neufeld is remembered as a forthright leader, a passionate preacher, and a critical storyteller who refused to simplify complicated truths. His work was to mediate between preaching and teaching, the work of the church and that of the university, to do justice to the difficult task of being a Christian in the contemporary world. His legacy lives on through the countless students and loved ones that he impacted and through the timeless stories that he told.