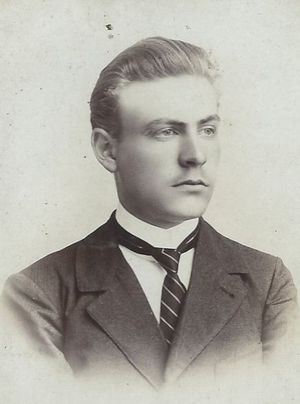 Heinrich Dietrich Neufeld: teacher and church leader; born 20 January 1884 in Orloff, Zagradovka Mennonite Settlement, South Russia, to Dietrich Neufeld (3 November 1860, South Russia – 29 November 1919, Orloff, Zagradovka, South Russia) and Anna (Baerg) Neufeld. He was the eldest of four children born to this couple (the second son, Dietrich, born in 1886, is the author of The Russian Dance of Death). Subsequent to Anna's death in 1893, father Dietrich married a Katherine von Bergen and a further eight children were added to the family. On 24 August 1903, Heinrich married Maria Walde (31 March 1885, Orloff, Zagradovka – 24 January 1967, Clearbrook, British Columbia, Canada). They had 3 sons and 4 daughters: Elisabeth, Diedrich, Helen, Henry, Katharina, Anne, and Hans. Heinrich died at the hands of the Makhno bandits on 29 November 1919 in Orloff, Zagradovka.

Heinrich was baptized in the Nikolaifelder Mennonite Church by elder Wilhelm Voth in 1903. He began his teaching career in Reinfeld, Zagradovka in 1903-04, and in the following year he taught in Altonau. In Altonau he met with several senior educators from Germany and this ignited a desire for further study and to broaden his horizons.

His diary at the time repeatedly referred to his concern over the spiritual welfare of the Mennonite people, and continuously prayed for an awakening. He rejoiced over the renewal happening in Altonau. His personal diary also indicated a serious passion to learn and to teach, as well as a deep commitment to preach the Gospel.

In fall 1906 he enrolled at the seminary in Basel, Switzerland, where he studied both Theology and Philosophy for three years. He also audited numerous courses at the University in Basel. His wife Maria noted that Heinrich subsequently referred to these times as the happiest years of his life.

In 1910 he was called to teach at the Alexanderkrone Business School in Alexanderkrone, Molotschna Mennonite Settlement, where he taught for only one year. Heinrich was then called to be the principal of a newly founded Zentralschule in Lugovsk where he served until 1913. In Lugovsk Heinrich was also ordained as a minister in the Mennonite Church.

On 29 November 1919 Heinrich Neufeld died at the hands of Makhno bandits along with many others.

Heinrich was described as one of the finest teachers and preachers who sought to raise the level of culture and Christian ethics among his people in Zagradovka. Neufeld was not a man of half-measures. He embodied a positive and practical Christianity.