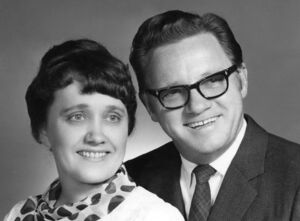 In his early years, Abram J. Neufeld lived in Sergeyevka, south Russia, together with his family. In 1926, the family immigrated to Canada, settling on a farm near Niverville, Manitoba. He completed his basic schooling before continuing on to post-secondary education.

On 17 August 1946, Abe Neufed married Irene Loewen at the Steinbach Mennonite Brethren Church in Steinbach, Manitoba. They attended classes at the Mennonite Brethren Bible College in Winnipeg, Manitoba. Following their graduation, they entered into ministry. Abe and Irene had three sons: Thomas, Charles, and Gareth. While the children were growing up, Abe taught at the Elim Bible school in Yarrow, British Columbia, Canada. Singing was always a large part of their ministry.

Following a brief pastorate at a Ukrainian Mennonite Brethren church in Kief, North Dakota, United States, and a short time at Tabor College, Abe and Irene Neufeld moved to Linz, Austria, in 1954 to work with refugees and other people in the community. While Abe worked in preaching and evangelism, Irene worked with the women, visiting and teaching them. They began holding Bible studies in their home, eventually establishing a church.

In 1959, the Neufeld family returned to Canada because their son Gareth had become ill. They returned to Europe in 1960, working in Switzerland and Germany. Following several years in Winnipeg, they moved to Vienna, Austria, in 1969, beginning a new ministry with university students, which soon grew to include over a hundred people meeting in the Neufelds’ apartment.

As the group grew, the congregation decided to lease space from a local bakery. From 1969 to 1983, Abe and Irene Neufeld worked to establish a church which later became known as 8. Tulpengasse or “Tuga.” Bible studies, leadership training, and congregational empowerment were central to the work at the Tulpengasse church. Soon, other congregations grew from the ministry, meeting in various parts of Vienna.

After many years in this ministry, Abe and Irene Neufeld returned to Canada in 1983, where Abe began serving as pastor of the Portage Avenue Mennonite Brethren Church in Winnipeg. He retired in 1990 before beginning work in a German-language ministry at the Elmwood Mennonite Brethren Church. Throughout their ministry, Abe and Irene Neufeld were involved in singing and music.

Abram (Abe) Neufeld was a dedicated minister and church planter whose work had a profound influence on churches and communities in Europe and Canada. Through the work that he and Irene did, many people's lives were changed.