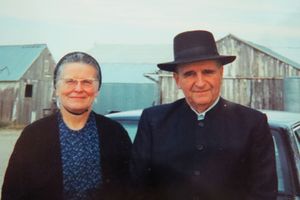 It was within this milieu that Jesse Neuenschwander matured in his religious thinking. In the early 1950s he attended Brunk Brothers Revival meetings in Lancaster, Pennsylvania. While there he met Helen Heistand, whom he married in 1954. At that time of his marriage, Jesse joined the Manheim Mennonite Church, Helen’s congregation, and part of the Lancaster Mennonite Conference. After completing his I-W service near Chambersburg, Pennsylvania, Jesse and Helen returned to Ohio where they farmed and participated in the County Line Mennonite Church, a “Wisler” congregation.

On 13 December 1959 Jesse Neuenschwander was ordained as a minister for the Manheim Mennonite Church. The family moved back to Pennsylvania where they continued farming along with Jesse’s ministerial work. He continued to encourage a conservative church life, and served on several boards in the Lancaster Conference, including the Nonconformity Committee.

During 1966 Jesse participated in conversations with other ordained leaders in the Lancaster Conference who had similar concerns. They began to hold meetings not explicitly sanctioned by the conference. In 1967 Jesse Neuenschwander withdrew from leadership at the Manheim congregation, and pastored a new White Oak Mennonite Church that a year later became part of the then forming Eastern Pennsylvania Mennonite Church (EPMC). In December 1973 he was ordained as a bishop in that group.

As a leader in the Eastern Pennsylvania Mennonite Church, Jesse contributed many articles to the Eastern Mennonite Testimony, and served as an associate editor for 15 years. He served as chair of the Publication Board of EPMC, as well as a board member of Rod and Staff Publishers. He was secretary of the Mennonite Messianic Mission board for 26 years and served on the Bahamas Committee for 16 years. He traveled widely to speak in conservative Mennonite congregations.

Jesse Neuenschwander was skilled in developing relationships. He listened graciously to those who disagreed with him and raised questions in such conversations without becoming defensive. His warm leadership style and influence left a rich heritage.