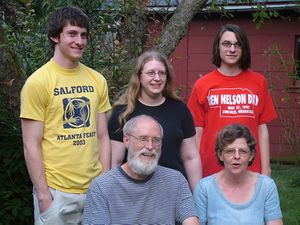 Dawn Ruth was born into the home of a Mennonite pastor and professor, but did not grow up in the heart of a Mennonite community. Her father was pastor of a small mission congregation, was studying for his doctorate in Massachusetts, and taught in a northern suburb of Philadelphia. Nonetheless she was immersed in a Mennonite world with which she felt some tension. She commuted for several years to attend Christopher Dock Mennonite High School, and graduated from both Goshen College (BA, 1974) and Associated Mennonite Biblical Seminary (MDiv, 1979). She completed a DMin in Mennonite spirituality at Lancaster Theological Seminary in 2004. Her thesis became her book, A Mennonite woman: exploring spiritual life and identity, published in 2010.

From 1979 to February 1992, Dawn Ruth and Paul Nelson were peace workers in Ireland for the Mennonite Board of Missions and Mennonite Central Committee. These were difficult years that tested Dawn’s faith, but also exposed her to Catholic spiritual formation and direction. Her return to North America saw her focus on issues around Mennonite spirituality.

Dawn first studied pastoral counselling at Neumann (Catholic) University (Aston, Pennsylvania), and from December 1994 to August 2004 served as a chaplain for the Indian Valley Foundation, providing support for persons with physical and mental disabilities. On 31 December 1999 the Franconia Mennonite Conference ordained Dawn for her chaplaincy work. During this time, she also studied spiritual direction at the Kairos School of Spiritual Formation (Lancaster, Pennsylvania), and later served on its board (2003-2009).

In 1996 Dawn Ruth Nelson began to offer spiritual direction, a ministry she offered for the next two decades. In July 2003 she became pastor of the Methacton Mennonite Church, a position she held until June 2014.

In January 2016 Dawn was diagnosed with ovarian cancer, but she remained active that year in activities like Bridgefolk, the Mennonite-Catholic dialogue.