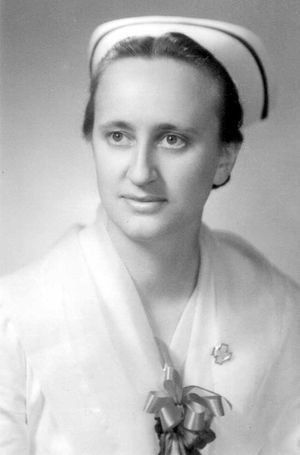 Marion Nafziger: missionary nurse, born 10 August 1921 in Milverton, Ontario, Canada to Enos Nafziger (27 October 1892-28 October 1979) and Elizabeth (Erb) Nafziger (23 August 1890-25 September 1947), the eldest of two daughters and one son. The family moved to Waterloo in 1937 where they were members of Erb Street Mennonite Church in Waterloo. Marion, a young, single woman, died on 8 July 1946 in a Singapore Hospital enroute to India on a Mennonite Central Committee (MCC) assignment as a nurse. She was buried in Singapore.

Marion attended the local high school and Eastern Mennonite School in Harrisonburg, Virginia. She returned to Ontario to train as a nurse at Kitchener-Waterloo (Grand River) Hospital, graduating on 9 June 1945. Some of her Mennonite classmates accepted assignments in Europe and Puerto Rico. Marion considered serving abroad but declared that to do so, MCC would need to ask her.

While completing summer work in Toronto, Marion received a letter from MCC calling her to serve with the Relief Unit in Calcutta (Kolkata), India. World War II had left shipping in chaos so it was spring 1946 before MCC could book passage on a Dutch freighter for Marion and co-worker Mildred Shoemaker. Marion gave a farewell talk at Erb Street's Junior Charity Circle on 12 March 1946.

The ship sailed from San Francisco on 27 April 1946 with a dozen business people and missionaries aboard, arriving in the Philippines two weeks later. Since all but two piers had been destroyed in the war, several weeks passed before the freighter could unload its cargo and move on. Passengers could disembark and go into Manila during the wait but Marion found the city, ravaged by war, too hot and dirty.

On 20 June the freighter finally left the dock, passed Singapore four days later and then returned to Singapore due to the captain's illness. At the same time Marion was suffering pain and a fever. She felt the ship's return to Singapore where medical help was available was God's plan. Marion was taken off the ship to the hospital. Her co-worker Mildred, with no visa for Singapore, could not stay with her.

Confusion reigned for several days with a doctor diagnosing “subacute appendicitis,” scheduling then cancelling surgery, then releasing Marion with a certificate indicating travelling was not a risk. Edna Lee, wife of a Methodist missionary, took Marion to her home and set out to arrange a flight to Calcutta for her. Edna soon realized something was wrong. Marion was confused and within a few days became almost violent. She was taken back to the general hospital on 6 June 1946 then transferred to a psychiatric hospital with a diagnoses of pneumonia and “acute mania.” Marion no longer knew her name. She died in the hospital on 8 July 1946, never reaching India or serving God as a missionary nurse. Edna Lee, one of the few people to attend Marion's funeral, laid orchids on her grave.

Marian never became the missionary nurse she felt called to be but her determination to answer that call will long be remembered.