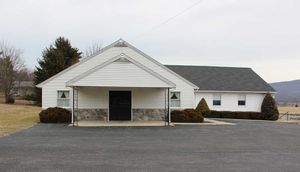 The Mountain View Mennonite Church at McConnellsburg, Pennsylvania, USA, began as the result of Summer Bible School held by the Washington-Franklin Conference North. Children from the African-American community on "The Hill" west of McConnellsburg had been attending Bible school at the Rock Hill Mennonite Mission. With the increase of enrollment and overcrowded conditions, the students were divided into two Bible schools in 1959 with the second one being held each June at the local African Methodist Episcopal (AME) Church south of McConnellsburg.

At the close of Bible School at the AME Church in 1967, Harry and Louise Branche requested a Sunday school be established. They felt that more than two weeks of Summer Bible School were needed. The response from the Washington-Franklin North Mission Board was positive to begin Sunday school immediately with the help of the Bible school teachers. Warren Clugston, a member of the Chambersburg Mennonite Church, was appointed by the Mission Board to be superintendent of the Sunday school for “The Hill” community.

Sunday school classes were held in a donated community mobile trailer located on "The Hill." The trailer was inadequate so a second trailer (with the partitions removed) was placed beside the original trailer. As a result, the work became known as “Trailer Mission.”

As the work progressed, Warren Clugston was licensed by the Mission Board on 19 October 1969 as pastor of the congregation. For the first two years in succession, revival meetings were held by James Harris from Anderson, South Carolina. The work prospered and the revivals and Sunday school were well supported with about 60 attending.

By 1972 it was apparent that this new mission would be a permanent congregation. The Mission Board decided to ordain a minister for Trailer Mission and Warren Clugston was ordained on 3 December 1972.

The trailers were used as a meeting place until the spring of 1974 when the present building was erected on the property just below "The Hill." The name of the church was changed to Mountain View Mennonite Church. The first service in the new building was held on 3 April 1974, with the dedication service on 1 June 1974. There were 16 members at that time, including Harry Branche, the pastor from the AME church who had made the request for Sunday school.

Ken Oberholzer was ordained as deacon on 6 June 1976, to assist with leadership. On 26 August 1978 the Mountain View congregation requested a release from Washington-Franklin Mennonite Conference North. The release was granted and Mountain View became an unaffiliated congregation with Omar Martin serving as bishop.

When the Warren Clugston family answered the call in 1983 to serve in Haiti for a year, Keith Clugston was licensed on 21 August 1983 (by lot for a year) to fill the vacancy in the ministry.

During 1984, an annex was added to the building for more Sunday school rooms and an overflow area for larger crowds. With the council of the congregation, Keith was ordained to the ministry on 20 January 1985. Omar Martin served as bishop until his retirement in 1990. Howard Weaver of Mid-Atlantic Mennonite Fellowship (MAMF) accepted bishop responsibilities at that time.