In 1950 the Markham-Waterloo Mennonite Conference group built its first meetinghouse about two kilometers north of West Montrose, Ontario at 6101 Middlebrook Rd. It previously had always shared meetinghouses with the Old Order Mennonites. This meetinghouse deviated from the traditional Old Order amphitheater seating arrangement in which the pulpit was midway along the long wall of the building. Rather the interior resembled Mennonite Conference of Ontario churches that had the pulpit at the gable-end of the building facing pews rather than benches. 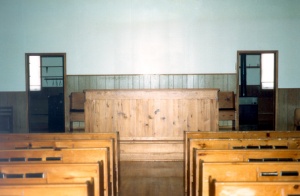 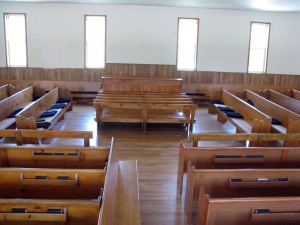 The reasons for the unique seating arrangement at the Montrose Meetinghouse are not clear. Several views have emerged -- one suggested the availability of some used pews at the time of construction; these were installed in the "cathedral" style of the conference churches. Another view has proposed that when the Markham Mennonites separated from the Old Order, some members wanted to express points of difference from the Old Order. However over the subsequent years the desire to maintain similarities to the Old Order prevailed.

On 16 April 1978 Minister George Brubacher from the Elmira congregation suddenly passed away while preaching at the Montrose meetinghouse. Silence filled the meetinghouse as he was carried outside and Minister Noah Martin arose to proceed with the service.

While the planning was underway to establish the Montrose West congregation, a request was made to renovate the Church to arrange the seating into the amphitheater style like all the other Markham-Waterloo churches. A meeting confirmed a favorable consensus to renovate and make the changes. This occurred in the spring of 2009 and was finished in time for the formation of the Montrose West congregation. The pulpit is now midway along the north wall with seating in the amphitheater style. This was the first time since 1950 that the Markham-Waterloo Mennonite Conference churches all have the same seating arrangement.

Minister Clare Frey from the Elmira congregation lived in the geographical area of Montrose West so became the home minister. Deacon Elmer Martin also lived in this area so was now the resident Deacon. Minister Elverne Martin served in the Montrose East geographical area and in June 2010 Richard Weber was ordained Deacon for Montrose East. Because of growth in the conference these two districts now came under Bishop Gordon Bauman’s leadership.