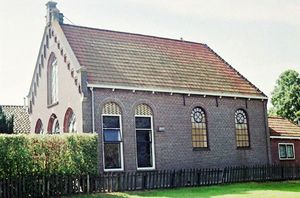 Molkwerum is a small village of scarcely 200 inhabitants in the southwest corner of the Dutch province of Friesland, was once the seat of a very large Mennonite congregation, of whose history not much is known. The congregation dated from the middle of the 16th century or even before. Leenaert Bouwens baptized 39 persons here in 1551-1554, 19 or 21 in 1557-1561, and 36 in 1563-1565, a total of 94 or 96 within 14 years. Soon the congregation must have increased greatly. One can hardly imagine that in this picturesque little hamlet at the beginning of the 17th century there were more than 1,000 Mennonites in three or four congregations, the largest of them being Waterlander (formerly Young Frisian) with 407 baptized members about 1600. In 1650, when the membership comprised 174 men and 233 women, it was decided to build a new church, commonly called the Groote Vermaning. This was a period of prosperity derived from shipping (it must have been in this period when 70 Molkwerum ships lay at the dock in Riga on the Baltic at one time). The Mennonites at this time made large contributions to Mennonites in other countries. In 1672, though trade was weakened by war, an offering of 259 guilders was raised for Swiss Mennonites. The war with England during this period seriously hampered the Mennonite shipping industry. Their preachers had to keep reminding the members that the weapons of their warfare were not carnal but spiritual; one shipper who had armed his boat was expelled from membership. The Waterlander congregation was served by lay preachers until 1808; among them was Harmen Reynskes, serving here 1690-1694, later preacher of the Amsterdam Zonist congregation, whose progressive ideas, considered Socinian by the conservative members, nearly caused a schism in the Molkwerum congregation.

At the beginning of the 18th century Molkwerum suffered the decline in trade affecting all the shipping towns on the Zuiderzee. The Mennonite congregations of Molkwerum also decreased rapidly. In 1695, when both the Groote Vermaning and the Kleine Vermaning joined the F.D.S. (Conference of Friesland), their membership numbered 167 and 97 baptized members. The union of the large group (Waterlander) with the smaller one (Flemish, commonly called Kleine Vermaning) in 1732 did little good; the combined congregation then numbered scarcely 200 members. All sorts of other factors contributed to the decline; a division in 1755-1767, and in the 18th century a conflict between a more liberal preacher and a conservative one, difficulty with the Reformed clergy, and finally trouble with the authorities (in 1705 the congregation had to surrender to the Reformed congregation a considerable legacy, which had been left to the Mennonites). In 1838 there were only 20 members left.

Until 1797 the congregation was served by lay preachers chosen from the members. The last of these preachers was Nanne Jans, who served 1755-death 1797. After Cornelis Gerbens van Grouw, a lay preacher called in from outside the congregation who served here 1796-1806, the Molkwerum congregation in 1808 joined the neighboring one of Hindeloopen in supporting a (trained) pastor; in 1873 Molkwerum joined the congregation of Stavoren for the same purpose. The membership, which had risen to 55 in 1910, in 1939 was 29. Wijtse S. van der Zijpp was treasurer 1867-1909. In 1921 a new church was built. On 16 May 1948, when there were only 12 members left, they decided to merge with the congregation of Warns, only two miles from Molkwerum. Thereupon the small meetinghouse was sold.