Mirror of the Martyrs, The -- The Bloody Theater of Nonresistant Christians (Exhibit) 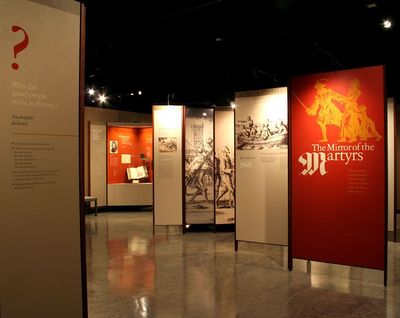 The Mirror of the Martyrs, Kauffman Museum, North Newton, Kansas.

The Mirror of the Martyrs--The Bloody Theater of Nonresistant Christians is an exhibit inspired by the discovery in 1975 of thirty copper plates used in the printing of the 1685 edition of the Martyrs' Mirror edited by Thieleman van Braght. This second edition included illustrations by the Mennonite artist Jan Luyken. Seven of the plates, thought to have been lost in World War II, were brought to the United States by Amos Hoover, Denver, Pennsylvania. In 1989 the remaining 23 plates were obtained by Robert Kreider, Kauffman Museum, Bethel College, North Newton, Kansas, and John Oyer, Mennonite Historical Library, Goshen, Indiana, and placed in the possession of the Martyrs Mirror Trust. In 2011 another plate was discovered and made available to the Trust.

In 1989 the construction of an exhibit based on the new acquisition was begun, designed by Robert Regier, Bethel College, curated by Robert Kreider and fabricated by Chuck Regier, Kauffman Museum. The exhibit was designed as a travelling exhibit, modular in design with self-contained lighting. It featured eight copper plates with additional images from the 1685 edition, four editions of the Martyrs Mirror (1660, 1685, 1748 and 1780) and various other artifacts that illustrate the times in which the events of the Mirror took place.

The exhibit opened at the Kauffman Museum in 1990, followed by a showing at Goshen College in 1991, after which it began a journey that took it across North America. It was accompanied by a book written by Kreider and Oyer, Mirror of the Martyrs, that includes 28 stories from the Mirror, biographies of editor Thieleman van Braght and illustrator Jan Luyken, and a recounting of how the plates were rediscovered and acquired. The exhibit inspired conferences on Anabaptism and martyrdom in a number of locations. By 2015 the exhibit had been on display in 68 locations in at least 22 states and five Canadian provinces.

"The Mirror of the Martyrs Exhibition." Mennonite Historian XX, No.1 (March 1994).