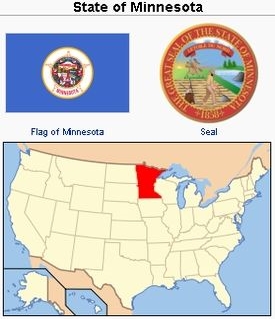 Minnesota, one of the Midwestern states of the United States of America, is bounded on the north by Canada, east by Lake Superior and Wisconsin, south by Iowa, and west by the Dakotas. The chief towns are Minneapolis and the adjoining capital St. Paul. The state is known as the land of 10,000 lakes. Mining and lumbering are among its industries, but the state is noted largely for its prosperous agriculture. Minnesota was the 32nd state to join the Union on 11 May 1858.

The first Mennonite settlers in Minnesota came in 1873 from the Crimea, Russia, into the Village of Mountain Lake, in the southern part of the state, which was hardly more than a railway station then. Other groups, all of Dutch-Prussian-Russian background, came in succeeding years; by 1880 some 350 families had come to this Cottonwood County village, which became the center of a large Mennonite community. Some of these families made their homes in the village and set up places of business, but most took up neighboring farm lands. A few families chose more outlying districts but later came back. Leaders in the early years were the four pioneer elders, Aaron Wall, Heinrich Voth, Gerhard Neufeld, and Heinrich H. Regier. Other personalities of note were Jacob J. Balzer, I. I. Bargen, and John Rempel, who were instrumental in organizing school and church life.

A smaller contingent of Mennonites came to Butterfield, in Watonwan County, the county east of Cottonwood, in 1880-1883. This group, of Galician (Swiss) origin, came from the Lemberg area in Austria. A few families of this group located in outlying districts, but only temporarily. Most of these people lived in or near Butterfield. The Butterfield and Mountain Lake area was really one community. Through the years a number of families drifted away to western states, and some to the cities, but many came back. The majority of the Mennonites in this locality were prosperous farmers, but a goodly number set up flourishing business establishments. Some went into professions, such as medicine, nursing, teaching, and the ministry.

A small group of Mennonites lived at Warroad, a town of about 1,500, in Roseau County in northwestern Minnesota, since 1934. Most of this group came originally from the Mountain Lake and Butterfield area. They left Minnesota in 1916 and settled near Lostwood, in northwestern North Dakota, but because of continued crop failures moved to Warroad. Their number was increased by some families from Alsen and Munich, ND, and others coming direct from the Mountain Lake and Butterfield community. They were all of Dutch-Prussian-Russian background. A congregation (General Conference Mennonite) was organized in 1939 and a country church was built. Its membership in 1954 was 86.

The last migration of Mennonites into Minnesota was that of the Mennonite Church (MC). One group came from Cullom, Illinois, to settle in 1894-1897 at Alpha, in Jackson County, on the Iowa border some 20 miles straight south of Mountain Lake. This congregation had 77 members in 1954. The next congregation of this branch was Lake Region at Detroit Lakes, 180 miles northwest of Minneapolis, founded in 1926, most of the members coming from Nebraska. In 1954 it had 87 members. A series of seven mission churches have been established by this branch in the 1940s-1950s in northern Minnesota (Cass Lake 26 members, Ogema 51, Queeton 15, Leader 26, Loman 20, Menahga 26, International alls 50). The total membership in these missions was 214. Thus the total membership of the Mennonite Church (MC) in Minnesota in 1954 was 378.

The total membership of all branches of Mennonites in Minnesota in 1954 was 2,907. -- J. John Friesen

Minneapolis has been the site of several large Mennonite gatherings including Probe '72 the General Conference special sessions on civil responsibility in 1979, and the United States Conference of the Mennonite Brethren in 1980.

Rempel, G. S. A Historical Sketch of the Churches of the Evangelical Mennonite Brethren. Rosthern, SK, 1939.

Schultz, F. S. A History of the Settlement of German Mennonites from Russia at Mountain Lake, Minnesota. Minneapolis, 1938.

Wittlinger, Carlton O. Quest for Piety and Obedience: The Story of the Brethren in Christ. Nappanee, IN: Evangel Press, 1978: 147.