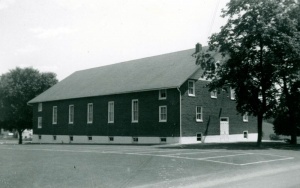 Millwood Mennonite Church (Biblical Mennonite Alliance), located two miles (3 km) northeast of Gap, Lancaster County, Pennsylvania, since 1945 a member of the Lancaster Mennonite Conference, was formed in 1877 with 22 families consisting of 124 members from the Old Order Amish community in this district, under the leadership of Gideon Stoltzfus, who had been ordained a minister in 1868 by the Old Order Amish, and was ordained bishop in 1888, serving in this office until his death in 1913.

On 25 February 2012 the church joined the Biblical Mennonite Alliance.

In 2015 the leading minister was Keith Beiler and the associate pastors were Elvin Ressler and Luke Sensenig. The congregational membership was 105 and the average weekly attendance was 100.