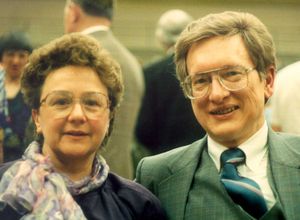 The Miller family moved to Goshen, Indiana in 1946, where Marlin grew up as part of a family engaged in small business. He attended Bethany Christian High School, and graduated from Goshen College with a BA in 1960. After attending Goshen Biblical Seminary for one year, Marlin and Ruthann moved to Europe in 1961 where he undertook graduate studies, first at the University of Basel and then at the University of Heidelberg where he received a summa cum laude doctoral degree in theology in 1968. His dissertation was published in 1970 as Der Übergang: Schleiermachers Theologie des Reiches Gottes im Zusammenhang seines Gesamtdenkens, a study on the Kingdom of God in the theology of Friedrich Schleiermacher.

From 1968-1974 he served with the Mennonite Board of Missions in France, and was ordained in 1971 for pastoral ministry in the Chatenay-Malabry congregation near Paris. During these years he was also very engaged in ecumenical activities for the European Peace Section of Mennonite Central Committee (1963-1974), which included participation in the Puidoux Theological Conferences. In later years he was further engaged in ecumenical discussions with other groups like the Lutheran Church.

Marlin Miller was often described as a person who “reached across walls,” building bridges between the Mennonite Church and the General Conference Mennonite Church, between Mennonites in Canada and the United States, between Mennonites and other Christians. He was strongly supportive of women in church leadership. According to a tribute by J. Lorne Peachey, “Most often his goal seemed to be unity as much as anything else.”

After his death, Miller’s tenure as seminary president came under severe criticism for the way in which he managed the sexual abuse scandal surrounding one of his faculty members, John Howard Yoder. Miller was very protective of the seminary he was leading, and provided little or no support to female students or other women who complained to him about Yoder’s behavior. Miller spent much energy trying to “contain” the scandal. Some colleagues later suggested the stress of dealing with the issue contributed to Miller’s early death.

Marlin Miller’s impact on the Mennonite Church was great, because of the leadership positions he held, and especially through the confession of faith he helped to shepherd almost to its conclusion. He espoused a peace theology for the late 20th century, and was remarkably successful in bridging the theological diversity within the two largest North American Mennonite denominations that would allow them to merge and realign as Mennonite Church USA and Mennonite Church Canada within a decade of Miller’s death.

Marlin Miller sacrificed his academic and theological career to administration and the work of the church. He looked forward to retirement from administration so that he could pursue theological studies and writing. His early death ended this hope.

The scar of the Yoder scandal at AMBS reflected both personal and institutional failure; it did not remove the other, positive, contributions Marlin Miller made to the Mennonite community.

Books by and about Marlin Miller