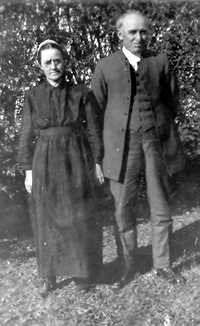 Isaac Miller accepted Christ as his Savior and became a member of a Baptist church at a young age. He left that church in 1890, due to disagreement with some of its doctrines, and joined the Mennonite Church in 1901. Two years later the Millers came to the High River area where they became active members of the Mount View congregation. In May of 1904, a year after their migration, Isaac Miller was ordained as a minister. He worked closely with Bishop Norman Stauffer, both in the Mount View congregation and in visitations to other scattered Mennonite settlements. For several years Miller and Stauffer alternated, once a month, in serving a small group of believers living east of Vulcan in the Snake Valley area. It was a sixty-mile trip by horse and buggy, requiring a Saturday morning departure and a return trip on Monday.

In 1914 Isaac Miller agreed to serve the small Clear Water congregation at Reist near Youngstown, Alberta, for one year. That involved considerable inconvenience and financial sacrifice for the entire family. Isaac Miller was ordained as bishop in 1928, after the death of Bishop Norman Stauffer. He was active in evangelistic work, and was assisted intermittently in his ministry by other ministers, but remained the leader of the Mount View congregation until his death in 1948. His wife, Lydia, served for many years as either the primary or adult Sunday school teacher, chorister and President of the Women's Sewing Circle.

The Millers gave strong support to non-conformist Mennonite lifestyles and dress codes. They believed they had been called by God, the Mount View congregation, and the conference, for important work in His kingdom. They entertained many friends and strangers, and visited many homes in the community and on remote homesteads. Their generosity and hospitality earned them great respect in the community,

Isaac Miller died suddenly in a Calgary hospital, due to a blood clot following a serious operation for cancer. He served the Mount View church and the Alberta-Saskatchewan Mennonite Conference for forty-four years as a minister and bishop.

Gladys-Dinton through the Years. Vol. 1, 1883-1964 available at the Glenbow-Alberta Institute.